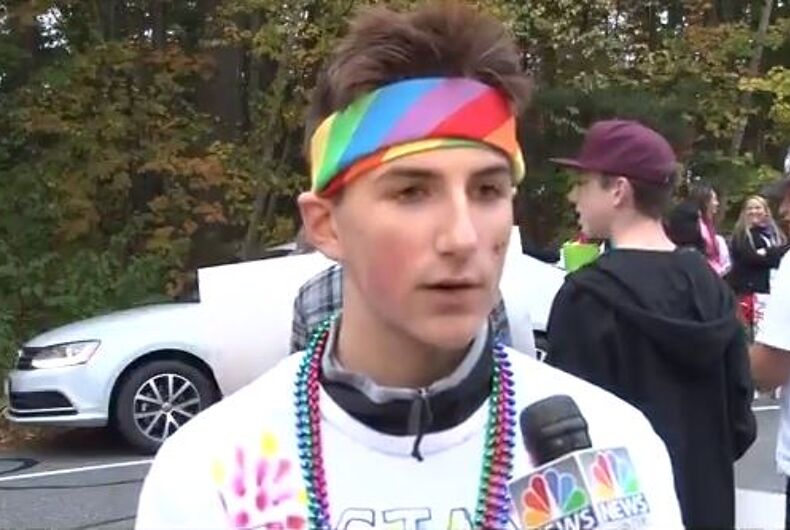 Garrett McCann, 14, talks about the bullying he has experienced because he's gay.Photo: Screenshot/WCSH6

Over 200 students rallied outside their school in Maine to show support their classmate, 14 year-old Garrett McCann, who has been getting bullied for being gay.

The rally began at 6:30 in the morning on Monday, and continued well past the start of school.

While McCann said that most students at York High School have been supportive of him, a handful have targeted him for harassment, including online, and his parents have said the school isn’t doing enough.

He reported the bullying to several teachers, who told him to go to the principal, which, as his father said, “never took the next step.”

Tim McCann, the student’s father, reported that school officials said his son didn’t go through the proper channels to report the abuse.

Police are looking into a possible civil rights violation stemming from the bullying, and have also arrested another student on assault charges, believed to be McCann’s older brother who retaliated against the bullies.

The rally has proved encouraging for the family, at least.

“Hopefully, this will lead to a good outcome going forward,” Tim McCann said. “I’m very proud of these students. Their message is about peace and love and protecting all kids from being bullied.”

“It’s only about four or five or six people [who were being bullies] and look at the people here. They’re definitely outnumbered,” his son told the Bangor Daily News. “I mean I don’t even know some of these people, and here they are.”

What can the shocking murder of an 8-year-old boy thought to be gay teach us about adults?