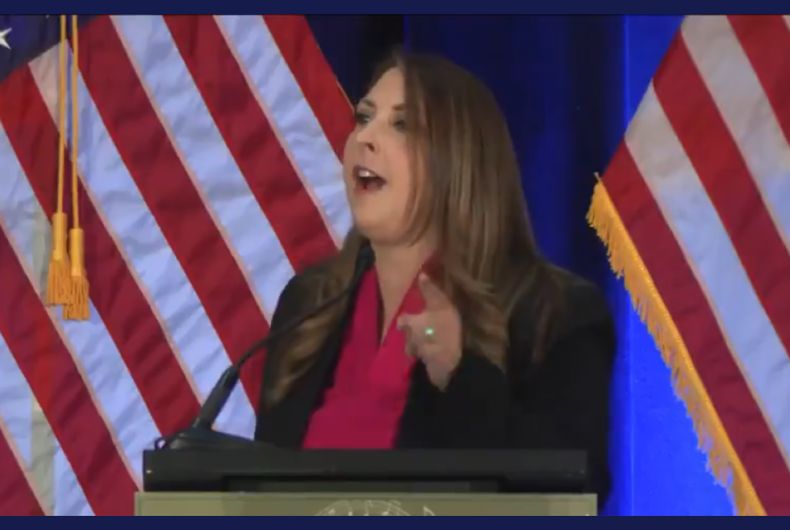 Republicans are coming out of the summer planning to bring their “empowering message” to America to lead them to “take back” the House, the Senate and the White House within the next three years.

One of those messages, according to Republican National Committee Chairwoman Ronna McDaniel, is to stop Democrats from supposedly taking away people’s rights to call themselves “mom.”

Related: Pregnant man & pregnant person emojis may be in the next update

At the RNC’s summer meeting, McDaniel went on a tirade attacking any and everything Democrats stand for, ranging from so-called “Critical Race Theory” to their wish to “mask up our kids,” in an attempt to prove how strong the Republican Party is ahead of next year’s midterm elections.

McDaniel was listing the “radical” things she said Republicans won’t let Democrats do to them, when she concluded, “Finally, The Democrats cannot take away my right to call myself a mom.”

She declared, “I am not a ‘birthing person,’ I am a mother, and it’s the most important job I will ever have.”

RNC Chair Ronna McDaniel: "We will not allow Democrats to close our classrooms again or mask up our children again." pic.twitter.com/PgLMMubeab

The term “birthing person” normally refers to a transgender man or non-binary person. There’s no widespread adoption of the term among Democrats — Politico reports that outside of CDC guidance, the term’s only been used recently in official documents by the Biden White House.

Both the CDC and the White House have continued to use gendered terms such as “mom” and “pregnant women” within the same documents, and “birthing person” is not used as an interchangeable replacement for either term. Yet, McDaniel is sure that this is proof that the Democratic Party is on a crusade to replace the term “mom.”

For example, the White House used “birthing person” or “birthing people” in their annual budget, just as they used the term “mother” or “mom” throughout. Yet right-wing media still proclaimed that Biden was trying to extinguish the “M word.”

The New York Post claimed in a July editorial that “the lunatic woke fringe” had taken over the White House with the “Newspeak.”

This follows in a line of right-wing panic over the last few months claiming that the “left” is trying to eradicate terms such as “mom” and replace them with “birthing person.” A birthing person refers to any person, which includes mothers and any other person that gives birth, rather than excluding mothers or assuming all people who give birth are mothers.

In May, Fox News, under the same parent company as the Post, dedicated an entire segment on Mother’s Day to claim that Democrats want to rename the holiday “Birthing People’s Day.” The network claimed that the “far-left” was out to “rebrand” moms.

“Seriously, This is, for Democrats, the new phrase they want you to use… you’re not a mother. Nope! Done! You’re a birthing person,” Fox News host Pete Hegseth claimed. He then played a clip from a congressional hearing the term “birthing people” was used twice. At the same time, the term “mothers” was used separately.

“The left is insane,” Hegseth claimed.

Like McDaniel, Hegseth presented no evidence that anyone in the Democratic Party was actively trying to “take away” or “rebrand” the term “mom” with “birthing person,” other than two documented Democrats using both terms with separate meanings.