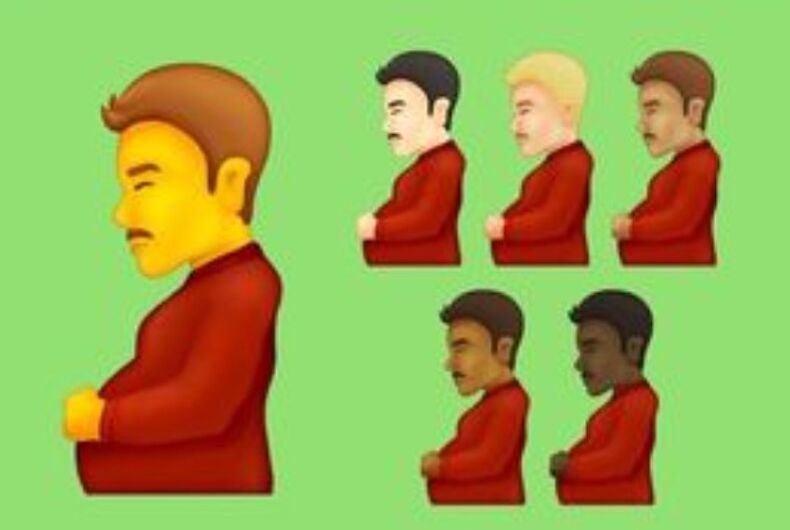 A “pregnant man” and non-binary “pregnant person” emoji may soon be available for use, according to a blog post from Emojipedia, the emoji reference website and voting member in the Unicode Consortium.

In a blog post, Emojipedia shared images of potential new emojis that could be approved for usage in Emoji 14.0, the next big emoji update.

The potential emojis run the gamut from heart-hands, a melting face, the low battery symbol, beans, a person with a crown… and a pregnant man and a pregnant person.

“Pregnant Man and Pregnant Person are new,” the blog post says, “and recognize that pregnancy is possible for some transgender men and non-binary people. These are additions to the existing 🤰 Pregnant Woman emoji.”

The pregnant woman emoji on most platforms has long hair and breasts. The pregnant man – which, Emojipedia stresses, is currently a draft and could change – has a mustache, sideburns, short hair, and a flatter chest. The pregnant person emoji has the same flatter chest but no sideburns or mustache to go with their medium length hairstyle.

Emojipedia adds that “person with crown” is intended to be “a gender-inclusive alternative to the existing emojis for 👸 Princess and 🤴 Prince.”

If these emoji are added, it “will mean that nearly all emojis can have default a gender neutral option, with choice to use a woman or man where relevant.”