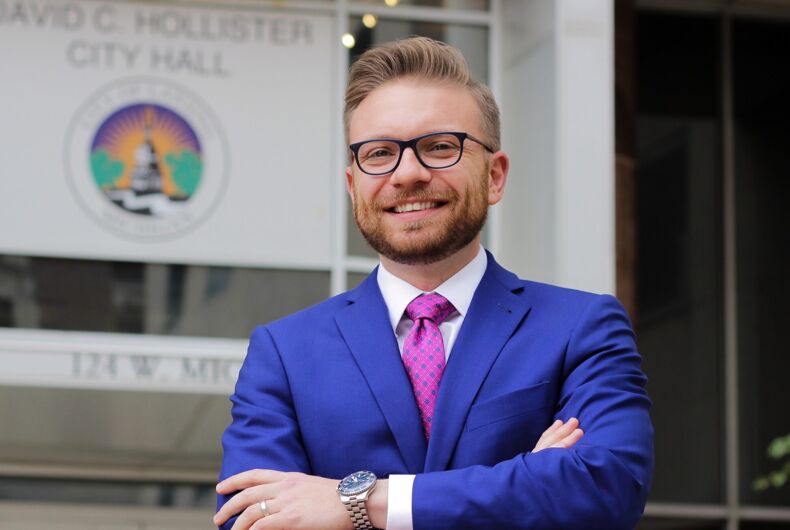 A Michigan activist has apologized after calling a gay city councilor a “hissy bitch” during an online talk show. It isn’t the first time he’s been involved in a back-and-forth with a councilor, but the last time the shoe was on the other foot.

Michael Lynn Jr., the co-leader of the Lansing Black Lives Matter group, filed a complaint with the city’s Board of Ethics after councilor Brandon Betz called Lynn a “dickbag troll” and a “weak ass bitch.”

“It’s a shame that in 2021 members of the LGBTQ community still face these kinds of attacks, especially from someone who purports themselves as a community leader,” Spadafore said. “I’ve heard every homophobic insult in the book and I can certainly take it, but far too many youth take their lives as part of this pattern of toxic masculinity. This type of vitriol is clearly offensive.”

A resolution to increase the funding for a county program lay at the root of Lynn’s outburst. Spadafore got testy when he denied the sponsor’s request for the resolution to be heard, saying it wasn’t an actual resolution as much as an attempt to circumvent the process. He noted he supported the program, but said, “this is not a resolution.”

“It’s an email chain with words in it that look like a resolution,” he said. “It came to us at 2 p.m. this afternoon. It’s not a vote against this resolution. It’s a vote against sidestepping that process after asking several times to please respect the process that City Council has.”

“I’ve never seen the Council get that animated about anything. Peter Spadafore looked like a hissy bitch up there. He was really upset. He was pissed,” Lynn said on his show after the meeting. “He was pissed that Kathie Dunbar would call him out on disallowing something. He got real hissy. That’s why I said ‘hissy bitch.’ He got really agitated and very aggressive.”

Lynn said he didn’t realize the sexist slur was also used as an anti-gay pejorative.

“This is some real accountability stuff. I learned something new today,” Lynn explained. “I apologize for that sincerely.”

Betz’s description of Lynn in similar language, however, cost him his committee assignments and he was censured by council. The Board of Ethics ruled the messages about Lynn were discourteous but did not violate the county charter.