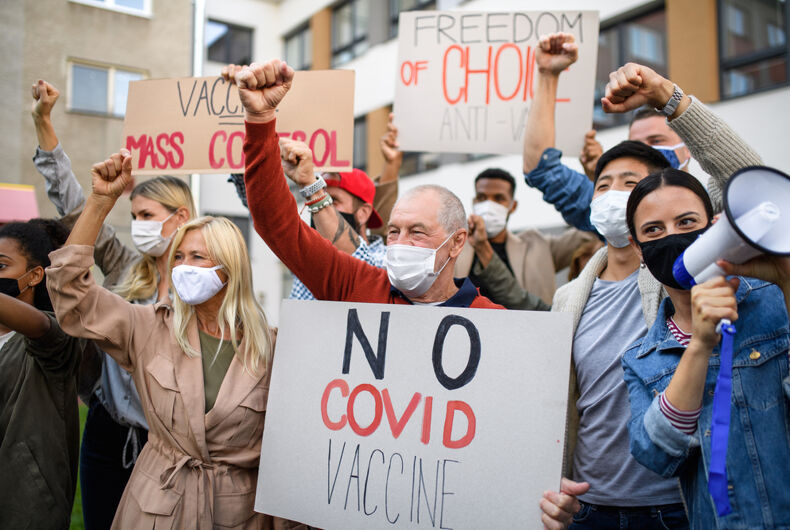 After months of bad-mouthing the COVID-19 vaccine, some conservatives are suddenly all in on vaccinations. House Republican Whip Steve Scalise (R-LA) finally got a shot after months of downplaying the need for a vaccine. Some Fox News talking heads have also been touting the efficacy of the vaccines. After months of suggesting the virus was a hoax, Sean Hannity declared, “It absolutely makes sense for many Americans to get vaccinated.”

So what happened for the change in tune? As in all things about the GOP these days, it all starts with Donald Trump.

“How about the vaccine? I came up with the vaccine. They said it would take 3 to 5 years. Gonna save the world,” Trump said at a rally in Arizona two weeks ago.

While saying he would “recommend” his followers to get a shot, Trump also fueled the partisanship that is driving vaccine resistance among Republicans.

“Because they don’t trust the president, people aren’t doing it,” he proclaimed, effectively undercutting his own recommendation.

It’s not the first time that Trump came out in favor of vaccination. He did so last March. But he’s devoted scant energy or rhetoric to telling his followers to protect themselves. At the same time, Trump keeps bashing the medical experts who have been warning about the virus since last year. As with all else Trump, it’s all about him taking credit and focusing on what matters most to him.

In the context of Trump’s lie that Biden stole the election, the message Trump is sending is that anything out of the current administration is suspect. A fleeting reference to the importance of vaccination takes a back seat to Trump’s main obsession, which is overturning a legitimate election. It’s where his followers are focused as well.

Right now, it’s spreading the Big Lie about election fraud. If Trump really cared about making sure his base got vaccinated, he could use his rallies to set up mass vaccination sites.

This same stew of mixed messages is now the main course for Republicans. Rep. Scalise got his vaccine, but he’s also been criticizing the CDC’s latest recommendations for mask wearing in light of the spike in infections. The recommendations, he said, are “about government control” — the very message that Republicans had been using to criticize vaccination efforts.

“People have a choice, they don’t need your medical brown shirts showing up at their door ordering vaccinations,” the anti-LGBTQ “QAnon Rep” Marjorie Taylor Greene (R-GA) tweeted last March. “You can’t force people to be part of the human experiment.”

Part of the problem is that Trumpism is now bigger than Trump. Since Trump lost his social media megaphone, he’s been reduced to issuing wan statements and ranting at rallies. He no longer commands the instant audience that he once did.

Trump followers are sweeping into the void. In an effort to be the Trumpiest Republicans of all, characters like Greene and Rep. Madison Cawthorn (R-NC) are pushing exactly the kind of misinformation that Trump has long trafficked in — even though Trump himself has (tepidly) recommended vaccinations.

And it’s not just politicians. Despite the turnaround at Fox News, its highest-rated show features Tucker Carlson, who had made lying about the vaccine a standard feature of his show.

As perhaps the most visible Trump stand-in, Carlson has claimed Dr. Anthony Fauci, head of the National Institute of Allergy and Infectious Diseases, created COVID himself. He has compared COVID vaccines to sterilization and lobotomies.  He has even said being asked if you’re vaccinated is like asking someone if they have HIV or what sexual position they prefer. (Carlson hasn’t disclosed his vaccine status, but you probably won’t lose a lot of money betting he was vaccinated a while ago.)

If Republicans really wanted to promote vaccination, they could do so. They could amplify Trump’s recommendation. They could constantly remind people of the importance of the life-saving abilities of the vaccines. They could even decide that, like infrastructure, vaccines are worth a bipartisan effort.

But that would require the party to abandon its embrace of conspiracies and face up to scientific facts. It would require COVID minimizers like Florida Gov. Ron DeSantis (R) to own up to the harsh reality that is now killing people in his state.

Instead, once again, they’re allowing fringe figures — this time Greene and Carlson — to set the conservative agenda. If the agenda means some people die, that doesn’t seem to matter. What matters most is loyalty to the anti-science, anti-government rage that, along with white rage, is now the Republicans’ only principle.