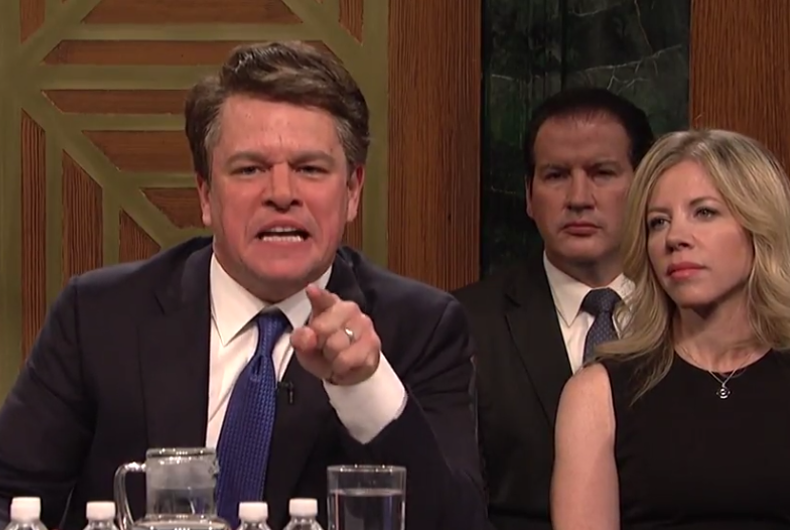 Actor Matt Damon bragged during an interview that he stopped using one of the most horrific slurs for a gay man last year. Damon says he “made a joke” that included the slur “faggot” and was surprised that his daughter was upset.

Damon admitted that he recognizes it as “the most taboo term for gay people” but tried to dismiss using the vulgar slur. His daughter, he said, wasn’t impressed with his casual homophobia.

Related: LGBTQ athletes are shining after the opening week of the Olympics

“I made a joke, months ago, and got a treatise from my daughter,” Damon said in an interview with the London Times. “She left the table. I said, ‘Come on, that’s a joke! I say it in the movie Stuck on You!’ She went to her room and wrote a very long, beautiful treatise on how that word is dangerous. I said, ‘I retire the f-slur!’ I understood.”

The 2003 movie he mentioned stars Damon as half of a set of conjoined twins and is incredibly problematic even without the anti-gay slur.

With millions of dollars at his disposal and a long career in Hollywood surrounded by LGBTQ people, it took a “treatise” for Damon to stop using a vulgar slur he knew was wrong to say. And then he bragged about it.

In 2015, Damon made waves when he said gay actors should stay in the closet if they wanted to advance their careers.

Damon told the Guardian: “I don’t want to, like [imply] it’s some sort of disease – then it’s like I’m throwing my friends under the bus.”

“But at the time, I remember thinking and saying, Rupert Everett was openly gay and this guy – more handsome than anybody, a classically trained actor – it’s tough to make the argument that he didn’t take a hit for being out.”

“In terms of actors, I think you’re a better actor the less people know about you period,” Damon explained.

“And sexuality is a huge part of that. Whether you’re straight or gay, people shouldn’t know anything about your sexuality because that’s one of the mysteries that you should be able to play.”

Back when Damon and Ben Affleck hit the scene running with Good Will Hunting and there were rumors that the two were lovers, Damon told Playboy: “I never denied those rumors because I was offended and didn’t want to offend my friends who were gay – as if being gay were some kind of f**king disease. It put me in a weird position in that sense. The whole thing was just gross.”

Republicans now want you to get the vaccine. But they also keep lying about it.