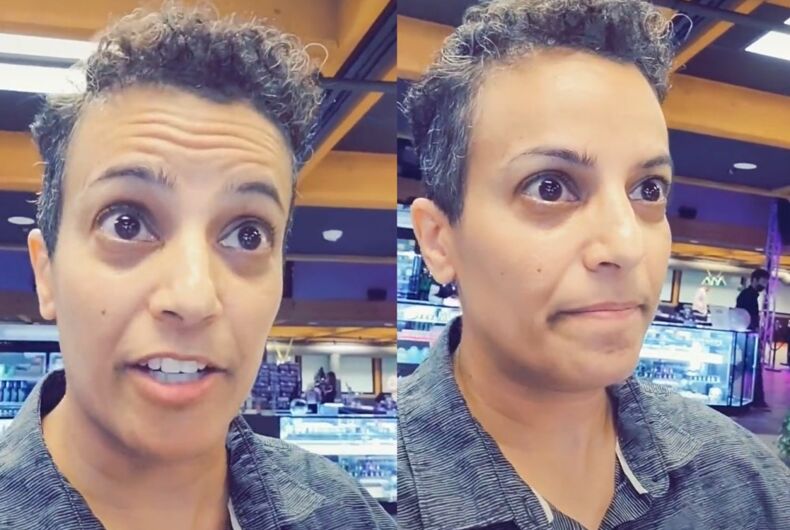 Dev started recording so that he would have a record of what happenedPhoto: Screenshot/TikTok

A video of a trans man getting denied access to the male restroom at a marijuana dispensary in Palm Springs, California has gone viral after he decided to record the manager who told him to stay out.

In the video, a trans man who goes by Dev on TikTok shows his ID and asks a person he said identified herself as Julie Montante, the co-owner of the 420 Bank and Dispensary to repeat what she allegedly said, that his ID isn’t important.

Related: Bi woman says she was detained at a clinic for 4 months & beaten to “expel evil spirits”

The employee responds by calling him “aggressive” an employee then comes and misgenders him, using she/her pronouns.

“Try to get over whatever is bothering you,” Montante says.

“The way you’re treating me is what’s bothering me,” Dev responds.

Montante says that she works with an LGBTQ organization, and Dev responds: “You should be fired, because what you’re doing right now is extremely transphobic.”

In subsequent videos, Dev said that he regularly goes to that dispensary and that he was hoping to educate Montante because he didn’t want to stop going there. He said that he thought there was a chance that the conflict could be resolved on the spot.

He said he was going to the restroom when he was intercepted by Montante, who refused to believe that he’s a man because his ID still has his deadname on it even though the gender marker has been changed.

Then she allegedly asked him, “What parts do you have? Do you have male parts?” and Dev responded, “That’s none of your business.” Montante then apparently took his response to mean that he’s “a female.”

When he asked what the problem was anyway, the employee allegedly said: “You’re going to be looking at men’s parts and we can’t have that.”

After that, Montante said, “It’s for your protection because it’s not safe for you to go in there because you’re a female.”

When Dev said that she’s being transphobic, he said she responded that she “volunteers with the LGBTQ community.” This is around the time that he started recording.

Montante allegedly said that she would allow Dev into the bathroom if it’s cleared of other men, which he said wasn’t necessary but when she believed no one was in there she let him go in. He said there was no one in there.

In 2019, the cannabis website Leafly published “6 simple ways to make your dispensary more trans-friendly.” Not assuming people’s genders and making restrooms gender-neutral are on that list.

LGBTQ Nation reached out for comment from the 420 Bank and Dispensary and this article will be updated if they respond.

Update: Julie Montante of the 420 Bank and Dispensary sent LGBTQ Nation a statement apologizing for “tense dialogue” and “misuse of gender attribution” in the video and said that Dev “should rest assured we are comfortable with his gender identity.”

She disputed Dev’s version of events and said that his video had been “selectively edited.” She said that he was not denied access to the men’s room and accused him of being “antagonistic and confrontational for other reasons,” although she did not explain what those reasons were. She also said that there were “complaints” made against him by others at the establishment but, again, she did not provide any details about those complaints.

Montante shared security footage with LGBTQ Nation that she says shows Dev entering the restroom. This doesn’t dispute Dev’s side of the story, though, since he said that after a lot of arguing he was able to go into the men’s room when it was empty.

“We welcome our guests as they identify,” Montante’s statement says. “Our restrooms are places offered for dignified access and use by our guests. We do not discriminate, and rest assured we will continue to improve on that fundamental operating policy with ongoing service to our LGTBQ+ community and continued sensitivity training for our staff and the community at large.”

“To anyone in the transgender community and beyond, please know we invite you to experience all Four Twenty Bank has to offer and to comfortably embrace your gender reality with dignified access to all our facilities.”