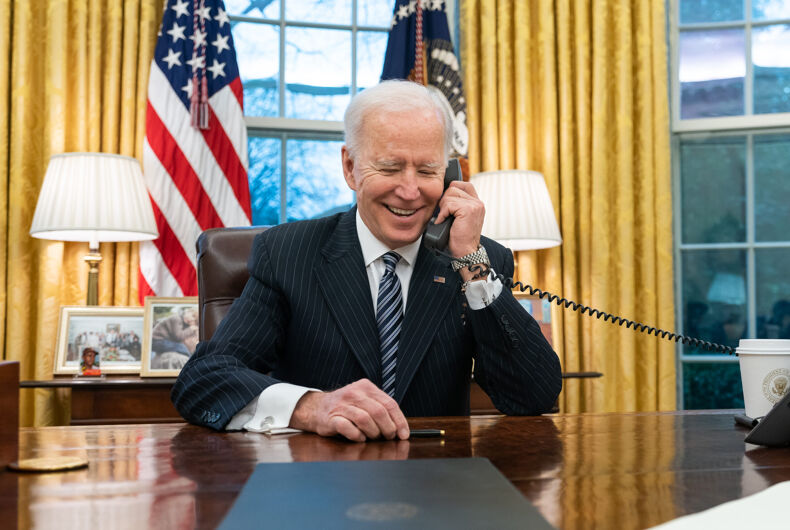 President Biden on the phone in the Oval Office of the White House Thursday, March 18, 2021.Photo: White House

This weekend, President Joe Biden announced ten further nominees for appointment within his administration, including multiple ambassadors and ambassador-level positions, all of which require

Two of the ten nominees are out: Biden is nominating Scott Miller as the Ambassador to Switzerland and Liechtenstein, and Todd Hopper as the Chairman of the National Credit Union Administration (NCUA).

Miller and his husband, philanthropist Tim Gill, consider themselves the most prominent donors toward LGBTQ rights in American history, having given over $500 million to pro-LGBTQ causes as of 2019. Both have contributed at least $3 billion to Democrat politicians or causes since 2010.

Gill is the founder of page layout software Quark and current Chief Technology Officer of technology company JStar LLC. Miller currently serves as the co-chair of the board of directors for the Gill Foundation, overseeing the non-profit’s giving policies.

Prior to that, he worked as an event planner, consultant and as a Wealth Management accounts vice president at UBS. Miller also worked on Biden’s presidential campaign in 2020.

The couple married in 2009 before then-Massachusetts Gov. Deval Patrick (D). They currently reside in Colorado and are well associated with out Gov. Jared Polis (D).

The White House described Miller as “an LGBTQ rights activist and philanthropist” who, as co-chair of the Gill Foundation’s board of directors, “directs the foundation’s national giving strategy to advance LGBTQ equality, including public education campaigns to ban conversion therapy and end discrimination against LGBTQ Americans.”

“If I’m fortunate enough to be confirmed, I hope to build on the work of my predecessors to strengthen the already solid relationship we have with the Swiss and Liechtensteiners, including our dynamic trade, investment and defense partnerships,” Miller said in a statement.

The Swiss ambassador represents the United States both in the prominent European country Switzerland and its neighboring micro state, Liechtenstein. The latter state long aligned itself under unions with Switzerland or Austria, and was represented by Switzerland in all foreign affairs until 1997. The position’s full title is Ambassador Extraordinary and Plenipotentiary to the Swiss Confederation and to the Principality of Liechtenstein.

“There is enormous power in LGBTQ people representing the United States abroad as ambassadors and Scott will ensure the advancement of equality is always on the diplomatic agenda,” Annise Parker, President of the Victory Institute, said in a statement.

“Much of his career has been dedicated to furthering LGBTQ rights and ending discrimination against the most vulnerable in America and we are fortunate he will soon have a global platform to push for these human rights issues. He will make a fantastic representative for our country,” Parker concluded.

Harper is Biden’s nominee to head the NCUA permanently. He has served as Chairman of NCUA’s board since January, but his two-year term as a board member is about to expire and he will now require Senate approval to continue serving. If confirmed, he will be the first internal NCUA staff member confirmed to serve as the chair of the agency.

“Todd Harper has specialized in financial services policy during his more than 25 years of government service,” the White House stated in its description of Harper.

Harper also chairs the Federal Financial Institutions Examination Council. From 2011 to 2017, he was NCUA’s chief policy advisor and head of their public and Congressional affairs department. He previously worked as a legislative staffer in the House of Representatives and for former Rep. Paul Kanjorski (D-PA).

Both Miller and Harper’s nominations will require Senate confirmation, meaning they will have to go before a Senate that is still considering, or yet to consider, dozens of other Biden nominees for other Senate-approved positions.

Several other key ambassadorships, such as the ambassadors to China, Canada, or Israel, have not yet had nominees named or confirmed by the Senate. The White House has named several nominees for several consecutive weeks after not doing so for a few weeks while Cabinet and Cabinet-level officials were considered.

Last week, among a series of appointments to several integral positions regarding American foreign policy that do not require confirmation from the Senate, President Biden named out rabbi Sharon Kleinbaum as a Commissioner on the United States Commission on International Religious Freedom (USCIRF).

Two weeks ago, two of the three out officials nominated to key positions in the Defense Department were finally confirmed by the Senate by unanimous consent, almost three months after they were initially nominated by Biden.

In June, Biden appointed Jessica Stern as the U.S. Special Envoy to Advance the Human Rights of LGBTQI+ Persons today, a role abandoned by the Trump administration and left vacant for nearly four years.