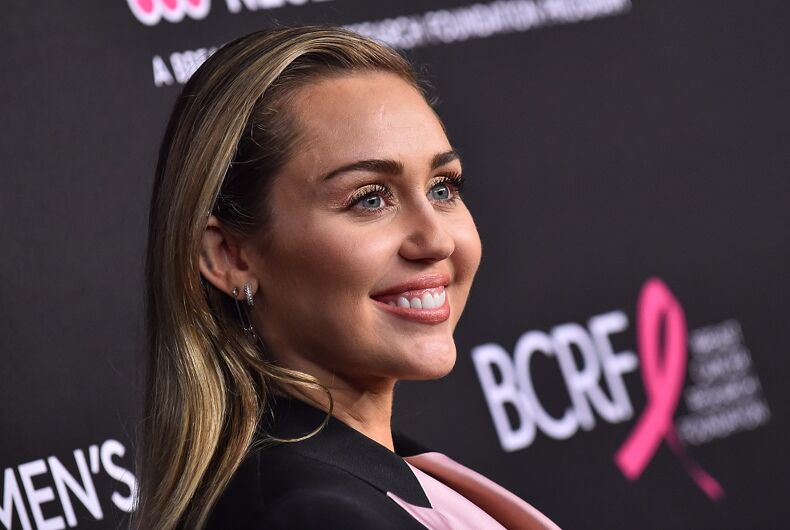 Miley Cyrus – who just announced this week that she will be a guest on Kevin Hart’s new talk show – is calling out critics of DaBaby’s homophobic and HIV-ignorant comments for being fueled by “hate & anger” and promoting “cancel culture.”

“As a proud and loyal member of the LGBTQIA+ community, much of my life has been dedicated to encouraging love, acceptance, and open mindedness,” the Hannah Montana star and Grammy-nominated singer wrote in a statement posted to Instagram.

“The internet can fuel a lot of hate & anger and is the nucleus of cancel culture,” she said before saying she prefers education and connection to cancel culture.

“It’s easier to cancel someone than to find forgiveness and compassion in ourselves,” Cyrus wrote, possibly a reference to the music festivals that have canceled DaBaby’s appearances following his hateful comments. “There’s no more room for division if we want to keep seeing progress!”

She told DaBaby to “check your DMs” in the caption on the statement.

DaBaby was trying to energize the crowd at the Rolling Loud Miami festival two weeks ago when video of his comments went viral.

“If you didn’t show up today with HIV, AIDS, or any of them deadly sexually transmitted diseases, that’ll make you die in two to three weeks, then put your cellphone lighter up,” he said.

Several days later, he released a new single called “Giving What It’s Supposed to Give,” where he raps: “Bitch, we like AIDS, I’m on your ass, we on your ass, bitch, we won’t go ‘way.”

He holds up a sign that says “AIDS” and then shots two men with pistols in the accompanying video. At the end of the video, he called out LGBTQ people hurt by his comments with the message “DONT FIGHT HATE WITH HATE” written in rainbow colors.

DaBaby was dropped from Lollapalooza and then issued an apology to LGBTQ people on social media.

Cyrus has gotten mixed responses for her defense of DaBaby. One top-rated commenter on BuzzFeed wrote: “I don’t know who asked her to jump in, considering his comments were directed at gay men, and more specifically gay Black men. She can’t forgive anyone on their behalf, especially when DaBaby has made it blatant that he’s not sorry.”

“Also, that was just the most recent problematic thing he’s said. No one even cares how he happily brought Megan’s shooter on stage just to gaslight her. He deserves to fester in his hatefulness,” the commenter concluded.

Perhaps it’s just a coincidence that she announced her appearance on actor Kevin Hart’s new talk show this week. Hart has also faced condemnation in the past for his hateful comments about gay men and people living with HIV, using the word “faggot” as an insult on social media.

“Yo if my son comes home & try’s 2 play with my daughters doll house I’m going 2 break it over his head & say n my voice stop that’s gay,” he wrote in a tweet.

Outcry over his history of homophobic comments – along with his choice to say that he refuses to forgive LGBTQ people for their “attack to end me” – cost him his gig as host of the Oscars in 2019.

But one prominent white LGBTQ person stood up for him: Ellen DeGeneres. In 2019 – about a year before she was the subject of accusations of running a “toxic” workplace rife with sexual harassment – Ellen had Hart on her show and publicly forgave him.

Her choice to forgive Hart on behalf of gay Black men and people living with HIV set off a firestorm of criticism.

“I’m all about forgiveness, but the interview as a whole doesn’t sit well with me,” wrote Taylor Henderson at Pride at the time. “These ‘jokes’ exhume a particular pain for many Black LGBTQ people. I remember hearing this kind of language from my own family as young as 11-years-old, quietly listening to relatives make fun of the ‘down low’ coworker and watching them turn their noses up at the cousin who brought their ‘roommate’ home for Thanksgiving.”

“I was called fag by people I loved before I even understood what being gay meant,” Henderson continued. “DeGeneres dismissing the real concerns of LGBTQ people as online trolls, then forgiving him on behalf of people she doesn’t speak for is a wild swerve out of her lane.”

She said that Ellen “lost everything when she came out on her show” in 1997, which is around the time that Da Brat’s career really took off, collaborating with Mariah Carey, T-Boz, and Missy Elliott and appearing in a film with Shaquille O’Neal.

She said that she’s “grateful” for the support she has gotten since coming out last year and for her fiancee Jesseca Dupart, who she said “made me really wanna not care about what anybody has to say.”