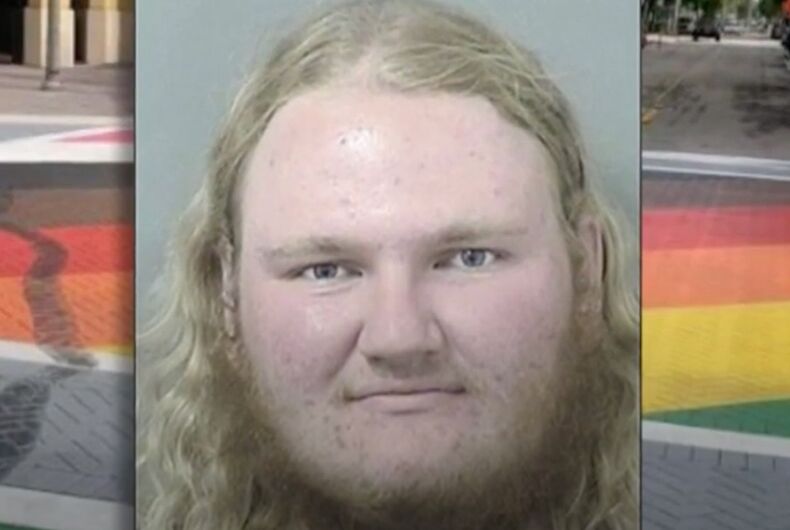 A Florida man who defaced a Pride crosswalk while on his way to a MAGA rally to celebrate former President Donald Trump’s birthday will not face hate crime charges. Alexander Jerich appeared in court on charges of criminal mischief and reckless driving with property damage instead.

Palm Beach County State Attorney Dave Aronberg said the hate crime charge couldn’t be added under state law because the city was the victim of the crime – and cities don’t have a sexual orientation.

The rainbow-colored crosswalk in Delray Beach cost $16,000 to install, but only seconds for Jerich to deface by doing burnouts with his pickup truck festooned with an “All Aboard the Trump Train!” flag.

Video shot of the incident clearly showed his license plate and after the video went viral online, Jerich turned himself in to authorities.

Aronberg expressed regret that Jerich couldn’t be charged with a hate crime, saying it was clear that was the motivation.

“The facts of this case… indicate that the defendant was motivated by prejudice, including a witness who heard someone scream to the defendant to ‘tear up that gay intersection,’” Aronberg said in a statement.

“We were, however, unable to apply Florida’s hate crime enhancement statute because the law requires that the defendant select a specific victim based on sexual orientation. Since the Pride streetscape is the property of the City of Delray Beach, the city is the named victim. Since a city has no sexual orientation, the state’s hate crime enhancement law cannot apply.”

“Make no mistake, we are all appalled by the defendant’s actions. Hate has no place in our community and we intend to hold the defendant accountable for his crimes,” he continued. “Any punishment must also include restitution that will pay for the Pride streetscape to be fully restored to its original form.”

“As much we are outraged by the defendant’s conduct, our job as prosecutors is to uphold the rule of law, regardless of politics or our personal feelings. By charging this defendant with these two crimes here today, we are fulfilling our mission to do justice based on the facts and the law.”

But the decision – and the excuse – has left a bad taste in resident’s mouths.

“The ‘victim’ is the Delray Beach LGBTQ Pride Streetscape, which was installed to recall and celebrate the achievements of the LGBTQ community — a protected class,” Palm Beach County Human Rights Commission President Rand Hoch said. “Jerich did not pick a random place to commit this crime. This man deliberately selected the intersection where the Delray Beach LGBTQ Streetscape is located.”

“If surveillance cameras caught someone carving anti-Semitic slurs in the sidewalk in front of a store owned by a Jewish person in Delray Beach, don’t you think State Attorney Aronberg would charge the person with a hate crime?”