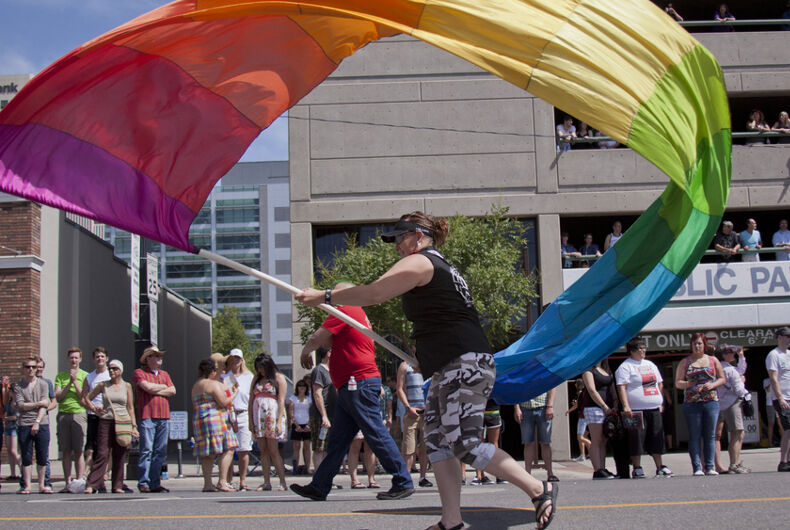 As our nation’s politics seem increasingly polarized, it’s important to remember how much progress the LGBTQ community has made simply through human connection.

From winning marriage equality to securing nondiscrimination protections in Republican-led and Republican-controlled states, to winning the nation’s first vote on transgender rights at the ballot box by a landslide, our community has always beaten the political odds through one-on-one conversations that open hearts and minds to our shared humanity. This year, we have an opportunity to do so again.

For nearly 50 years, our community has worked to update our nation’s federal civil rights laws to include LGBTQ protections. We’ve achieved historic milestones since the first federal bill was introduced in 1974. Twenty-one states have express protections and we’ve passed comprehensive legislation through the Equality Act in the U.S. House twice with bipartisan support. This year the legislation had its first-ever Senate hearing.

We should be proud of this hard-won progress. And yet, it’s not enough.

It’s not enough for Bailey and Samantha Brazzel, who simply wanted to file their taxes but were turned away by an Indiana tax preparer because they are a same-sex couple.

It’s not enough for Chris Chun, a 30-year Army veteran in Texas and father to a transgender girl whose safety he worries about every day.

And it’s not enough for Stella Keating, a teenager who is concerned about how inconsistent protections across the country shrinks the universe of where it’s safe for her to attend college because she is transgender.

Their stories aren’t outliers. One in three LGBTQ people — and three in five transgender Americans — report having faced discrimination over the past year. The numbers are exacerbated for our Black, brown, and other LGBTQ community members who are people of color. Our most vulnerable community members face profoundly greater harm including higher rates of discrimination, poorer mental and physical health, and greater economic insecurity, all of which increase exposure to violence.

For the first time in history, our movement has a real and immediate opportunity to win nationwide protections. We have congressional leaders that want to pass the Equality Act and a president who wants to sign it into law. We have a supermajority of public support from Americans across political affiliations, support from hundreds of businesses, and among all mainstream faith traditions including white Catholics and evangelicals.

But our window to pass a bill isn’t infinite. We can’t predict how the 2022 elections will shape the political environment. Now is the moment of opportunity, and now is the time for us to rise up with all we have to finally ensure that every LGBTQ person is promised basic dignity and respect under federal law.

Our challenge is to secure 60 Senate votes to win. This is a daunting task, but even our opponents know we can accomplish it.

As lawmakers on both sides of the aisle discuss the bill, our opposition has saturated Capitol Hill with calls and flooded state legislatures with anti-LGBTQ bills that spread misinformation about our lives. Our opponents know and fear the power of our community mobilization.

That’s why we must insist bipartisan lawmakers prioritize prohibiting discrimination against us, and we do that by making it a priority ourselves.

During the congressional recess, we must organize in lawmakers’ backyards – hosting town halls; scheduling in-district signature drop-offs; distributing postcards and collateral; making calls and sending emails; tweeting at senators; and more. We need to make noise and tell them to prioritize the Equality Act in order to reveal the fiction animating our opponents’ messages and show the truly deep support across America for this bill.

This explosion of local activity builds on decades of advocacy and will serve as the culmination of the long-term work to pass the Equality Act. This includes dozens of constituent meetings with senators monthly, hundreds of op-eds and letters to local editors, and thousands of conversations with everyone who cares about LGBTQ people about how to get involved. This combination of efforts will ensure the strongest LGBTQ nondiscrimination protections possible.

It’s not easy, but we can’t win if we don’t try. We owe it to ourselves to try everything in our power to ensure a bipartisan victory before this moment slips away. The early marriage equality fight had very little political support. We won electeds on both sides of the aisle over heart-forward conversations about love, family, and our common humanity. Those shared values moved us over the finish line, and they will deliver victory now if we all do our part.

The past six years have brought tremendous growth in conservative support for LGBTQ protections. This isn’t a surprise – treating each other the way we want to be treated is something we can all get behind. Republican lawmakers have introduced and sponsored nondiscrimination bills, voted for them, and signed them into law. We can and will keep winning people to our side.

With the unprecedented assault on transgender youth in state legislatures this year, it’s clear that discrimination is real and protections are needed. Let’s show those kids that we see them and we’ll fight for them. And let’s win.

Kasey Suffredini is CEO and National Campaign Director of Freedom for All Americans, the bipartisan campaign to secure LGBTQ nondiscrimination protections nationwide.

He kissed his boyfriend & got off the bus with a smile. That’s when his basher attacked.