Rep. Lauren Boebert (R-CO) poses in front of a bunch of guns because she thinks it makes her look toughPhoto: Screenshot

Hubbard, who has faced controversy for competing as her gender, became a lightning rod for conservative pundits who have routinely opposed allowing transgender children to participate in school sports. Some have gone so far as to demand young girls have their genitals examined before they’re allowed to participate.

While Hubbard didn’t medal, she is still the first trans woman to compete at the Olympics and earned a place in history.

But that didn’t get the respect of Boebert, who regularly traffics in conspiracy theories and anti-LGBTQ rhetoric

“Imagine switching genders to win a medal and then blowing it and now you’re stuck being a woman for the rest of your life,” Kelly tweeted with a link to a story about Hubbard’s loss. Boebert retweeted Kelly’s tweet. 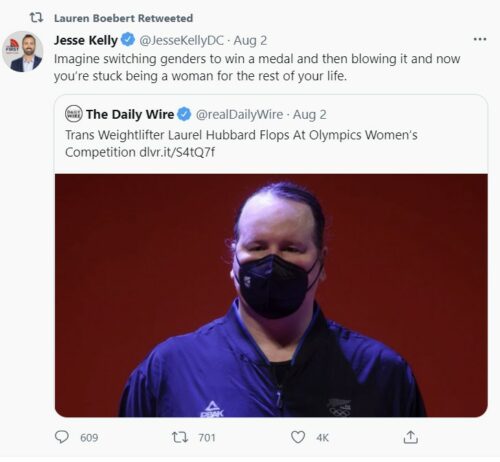 Hubbard is one of four trans Olympians that made the trip to Tokyo, including Canadian soccer player Quinn, American skateboarder Alana Smith, and American BMX competitor Chelsea Wolfe, as an alternate. She met Olympic requirements for transgender athletes.

Right before the competition, the International Olympic Committee (IOC) fended off several requests to remove her from the games despite qualifying. The IOC refused to do it.

Her participation has continued to be polarizing, however. At least one Olympian, swimmer James Guy of the United Kingdom, is under fire for transphobic remarks he made about Hubbard.

Resharing a report from Reuters after Hubbard was named to New Zealand’s Olympic team, Guy responded to the news by saying, “How’s that fair,” adding that they should “put me in the women’s 100 fly then.”

Imagine saying this weightlifter was going to ruin women’s weightlifting forever and then being wrong.