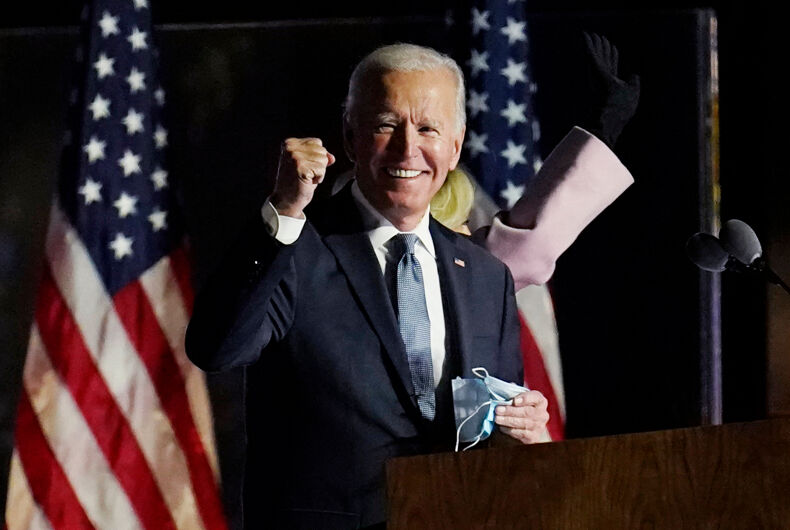 President Joe Biden spoke to reporters after an event at the White House to celebrate the Senate passing his massive $1 trillion infrastructure spending bill and drew a parallel between the bipartisan support for the bill and the Equality Act.

The landmark civil rights legislation would ensure full protections for LGBTQ people but has languished in the Senate despite Biden declaring it a top priority for the administration. Republicans have vowed to make sure the measure doesn’t pass by filibustering any attempt to vote on it.

Biden’s infrastructure plan, which out Transportation Secretary Pete Buttigieg has been promoting for months, was once considered dead in the water. A deal partially negotiated by out Sen. Kyrsten Sinema (D-AZ) brought Republicans on board to get it over the finish line.

Washington Blade reporter Chris Johnson asked Biden whether there were any lessons to be learned from the negotiation on other progressive priorities like voter and police reform or LGBTQ rights that also seem to be on their death beds.

“By you guys or by me?” the President joked in response.

“I’m sorry, I’m shouldn’t kid,” Biden continued, “but I was just reading about 50 statements from very serious press people about how my whole plan was dead from the beginning.”

“The lesson learned is being willing to call people in and listen, listen.”

“And I think the lesson learned is exposing people to other views,” Biden said. “And so, that’s why from the beginning, on all the subjects you raised, I’ve sat with people and listened to their positions, some in agreement with where I am and some in disagreement. And so, I think it’s a matter of listening; it’s part of democracy.”

The hurdle that the Equality Act has to clear is getting 60 votes in the Senate. (The House quickly passed the bill with support from just three Republicans.) With an evenly divided Senate, that meant getting ten Republicans to sign onto the bill so that it could avoid being silently killed by filibuster requirements.

The odds of getting that many Republicans to support the Equality Act were always small, and Biden probably knew that considering he spent decades in the Senate.

Moreover, the Biden administration had other priorities where the chances of getting something done were a lot higher than getting the Equality Act passed. Chief among these has been increasing infrastructure funding.

“What they’re saying is, economic package first,” Jim Kessler, co-founder of the centrist Third Way think tank and a former Schumer aide, told the Daily Beast last month. “The other pieces, as critical as they are, are going to go on their own timeline.”