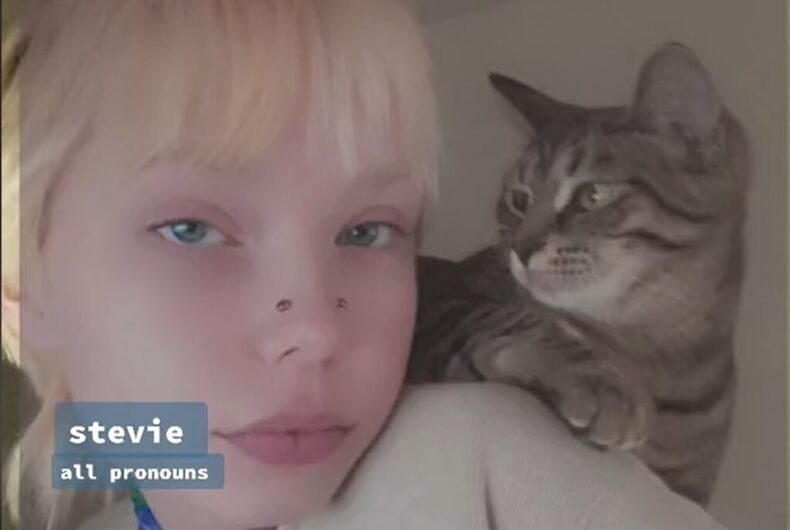 Eminem's nonbinary child, Stevie, is introducing themselves to the world.Photo: Screenshot

Eminem’s youngest child has come out as non-binary on TikTok, saying their name is Stevie and they use “any” pronouns.

In the video, Stevie shows photos of themself with their former name as words on the screen document their progression through names and pronouns.

Related: Watching Elton John pretend to get a COVID vaccine will leave you ready to get pricked

They captioned the video “Watch me become more comfortable with myself.”

The 19-year-old was adopted by Eminem after he reconciled with their mother, Kim Scott. He also has a daughter, Hailie, with Scott.

Speaking on Mike Tyson’s podcast in early 2020, Eminem bragged about Hailie and mentioned his other children as well.

“I have a niece that I have helped raised, too, that’s… pretty much like a daughter to me, and she is 26. And then I have a younger one that’s 17 now,” he said. “So when I think about my accomplishments like that’s probably the thing that I’m the most proud of, you know, is that—is being able to raise kids.”

The rapper has taken heat for repeatedly using anti-gay slurs in his music despite his close friendship with out singer Elton John. As recently as 2018, he was using the word “faggot” in new releases.

“It’s never ok to say a word that is filled with hate. I don’t care what year you were born in or what meaning it has to you,” Imagine Dragons singer Dan Reynolds tweeted at the beginning of a multi-day takedown of both Eminem and the culture that excuses his repeated slurs after the album was released. “If it contributes to hate and bigotry then it is hateful. Period.”

“There is never an ok time to say the word faggot. I don’t care who you are.”