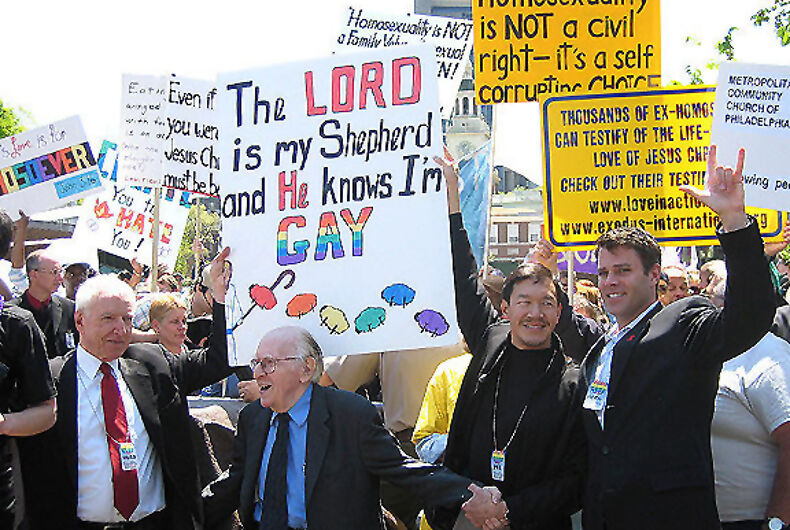 James Hormel, the first out gay American ambassador, has died at age 88. He is survived by his life partner, Michael P. Nguyen.

Hormel was nominated by former President Bill Clinton to be ambassador to Luxembourg in 1997, spawning outrage among Republicans and some Democrats who refused to confirm his nomination. Clinton made Hormel a recess appointment in 1999, allowing him to bypass the Senate confirmation vote.

After leaving government service, Hormel continued his activism and philanthropy. Heir to the Hormel meatpacking fortune, he gave generously to HIV/AIDS causes, civil rights organizations, and funded the Gay and Lesbian Center at the San Francisco Public Library, which is now the James Hormel LGBTQIA Center.

Hormel helped to found and financially support the Human Rights Campaign, National Center for Lesbian Rights, the Victory Institute, Lambda Legal, and other longtime LGBTQ organizations that have fought for civil rights in all areas of life.

After being announced as President Joe Biden’s pick to be Secretary of Transportation and the first out Cabinet Secretary, Pete Buttigieg said he remembered the opposition to former ambassador Hormel during the Clinton administration and the message it sent to him as a teenager.

“Jim Hormel made history as the first openly gay U.S. Ambassador, paving the way for a new generation of leaders and elevating the voices of LGBTQ voices in our foreign policy. With his gentle yet powerful voice and undaunted determination, Jim made it his mission to fight for dignity and equality for all. As the first openly gay Ambassador, he had the courage to be a pioneer and had the patriotism to accept the challenge,” House Speaker Nancy Pelosi (D-CA) remembered.

“When the AIDS epidemic descended upon San Francisco, he called on our conscience and rallied the city to help our neighbors suffering from the ferocious disease. His work served as a model for national policy to defeat HIV/AIDS and improve the lives of all affected. … Jim’s extraordinary life will always serve as a beacon of hope and promise for LGBTQ children across our country and around the world.”

“The importance of the leadership of Jim Hormel,” Lambda Legal CEO Kevin Jennings said in an emailed statement, “to the success of the LGBTQ+ movement cannot be overstated. When our movement was starved for financial resources, and too many of those who had them were too afraid or embarrassed to associate themselves with our community’s organizations publicly, Jim stepped forward, leveraging his family’s famous name and his personal fortune to fund literally thousands of organizations (Lambda Legal included), political candidates, and individual activists & artists. Without his generosity and the example he set (which inspired countless other donors to step up), our movement would not be where it is today.

“Jim’s own courage under fire when he was subjected to a homophobic hate campaign after his Ambassadorial nomination by President Clinton was an inspirational testament to his character and integrity. When I remember Jim, the word that will always come to mind for me will be ‘kind.’ Jim treated all he met with great kindness and utmost respect, modeling goodness in all he did.”

“Jim’s appointment was a breakthrough moment for the LGBTQ rights movement and his successful post in Luxembourg set the stage for future LGBTQ ambassadors facing confirmation,” Mayor Annise Parker, President & CEO of LGBTQ Victory Institute, added. “Whereas Jim endured homophobic abuse from anti-LGBTQ U.S. senators that led to his recess appointment, now LGBTQ nominees are largely considered on their merits and qualifications.”

“Jim was a trailblazer and withstood the anti-LGBTQ attacks with dignity, as trailblazers often do. Yet he helped jumpstart a new era where LGBTQ public servants recognized they could serve their country and be out and proud about who they are. His passing is a loss for our movement and our country.”

Eminem’s youngest child comes out as non-binary on TikTok