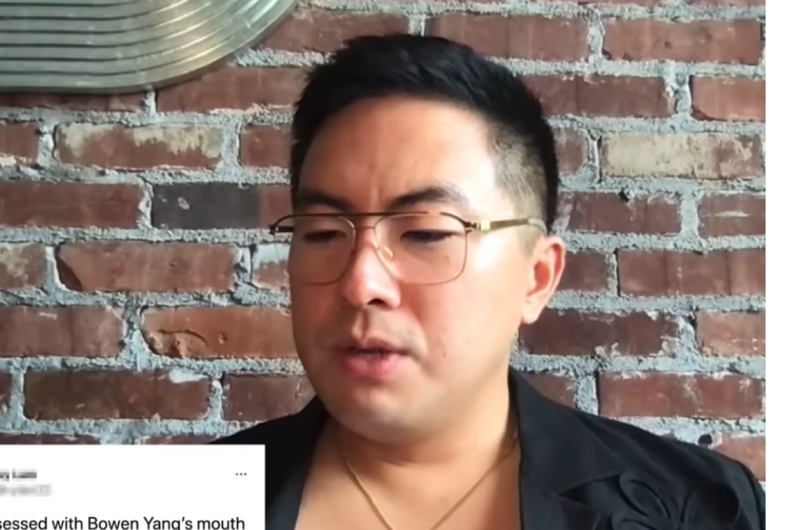 Bowen Yang reading one of the "thirst tweets" about him.Photo: Screenshot/Buzzfeed

Out actor and comedian Bowen Yang has finally received the rite of passage all stars of the modern age need to have: a video where he reads tweets written about him.

The 30 year-old Saturday Night Live star sat down to read a bunch of “thirst” tweets written about him. Unsurprisingly, the results were glorious.

The video is part of Thirst Tweet, an ongoing series produced by Buzzfeed, similar to a concept now popular among late-night and comedy shows, such as Jimmy Kimmel Live!

What separates Thirst Tweet is that all of the tweets shown to the celebrities feature posts where the authors publicly expressed their sexual or romantic feelings for the celebrity.

One previous moment in the Buzzfeed series that gained notability was when Taron Egerton, who starred as Elton John in the biopic Rocketman, learned what a “bussy” is.

Yang referenced that moment when he read one tweet where a user said they wanted Yang to spit in their mouth.

“What’s it called when you’re, like, the receptive partner to spit? That’s what I am. I’m like a spit bottom,” he joked.

“This is a Taron Egerton moment for all of you,” he said. “I have a great mussy.”

He even gave an example of using it in a sentence while reading a later tweet that read, “I’m obsessed with Bowen Yang’s mouth.”

“You mean my mussy?” Yang replied.

Other highlights from the video include Yang’s criticism of Tinder (“What’s that business model, Tinder? … I call ‘freemium’ bullshit on that whole thing”), his attempt to pretend he doesn’t know what Grindr is (“grind-er? Just kidding”), and his desire to be a tourist attraction for guys visiting New York City.

“I would love to be like the sexual equivalent of tickets to Hamilton,” Yang said. “I would love to be a New York City attraction. Like come to the city, and, you’re lucky if you have the right concierge at your hotel, they might be able to get you a message for me on Grindr.”

“What am I saying?” he pondered after.

Yang revealed in a 2020 interview that he had been forced to attend a gay conversion therapy camp as a teenager. It happened when he was seventeen, after his parents discovered a sexual conversation Yang was having online.

Ahead of the 49th season of SNL, Bowen Yang is starring in the second season of Awkwafina is Nora from Queens, currently airing on Comedy Central.

Israel is ending their ban on blood donation from queer men. Why isn’t America?