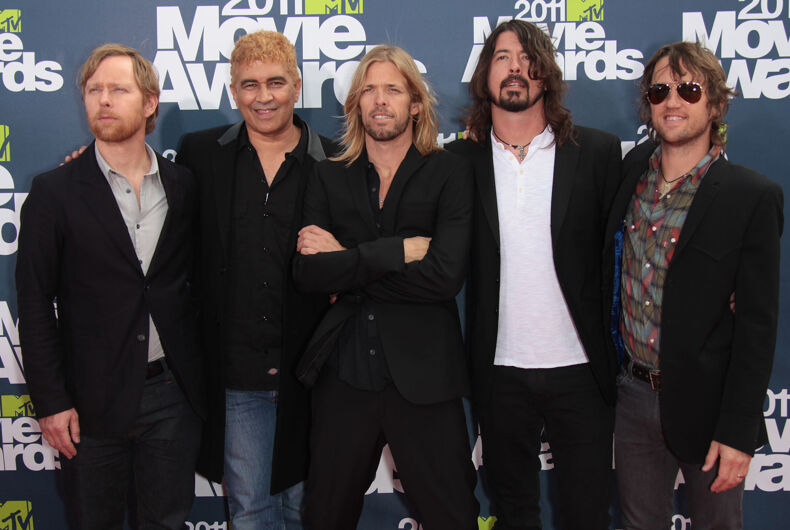 As much as the pandemic has changed about performing and touring for musicians, some things haven’t changed.

The Foo Fighters have been opposed for a long time by the anti-everything hate group, the Westboro Baptist Church. Westboro returned to their spite for the rock band by picketing their latest show, which they’ve done for years.

Related: Did Westboro Baptist founder Fred Phelps change his mind about LGBTQ people before he died?

Fred Phelps founded the Westboro church in Topeka, Kansas in 1955. Since at least 1991, Westboro has been actively involved in actions against gays. The church is reported to comprise fewer than 50 members, almost all of which are members of Phelps’ extended family.

They’re now infamous for their signs at pro-LGBTQ events that often read “GOD HATES FAGS” and “THANK GOD FOR 9/11.” Westboro’s become too hateful even for some of the most ardent anti-LGBTQ advocates.

So when the church protested their show outside Bonner Springs, Kansas, holding signs that read “God sent the Coronavirus in fury” and “Free Will is a Satanic Lie,” the Foo Fighters responded. The band came out on the back of a pickup truck to where the church’s followers were protesting, playing disco music and dressed like legendary disco group the Bee Gees.

“I got something to say,” band frontman Dave Grohl said to the protestors, “because you know what, I love you. I do. The way I look at it, I love everybody. Isn’t that what you’re supposed to do? Can’t you just love everybody?”

The protestors start yelling at the band, but Grohl continues. “I think we’re all about love, and you know what you all should be doing? You should be dancing!”

The band then starts playing “You Should Be Dancing,” a cover of the Bee Gees song by the “Dee Gees,” the alter-ego cover band by Grohl and the Foo Fighters.

Grohl enjoyed retelling the tale at the actual show before once again breaking into the Bee Gees classic.

So awesome. Here’s my video of Dave during the concert (colorfully) describing what happened earlier. Yay Foo! pic.twitter.com/FpHNyO937U

Fans of the band also rejoiced, with many online enjoying the return of something pre-pandemic.

Westboro has taken issue with Foo Fighters going back a decade now. The Foo Fighters have always responded in the best ways to make them even more mad.

In 2011, the Foo Fighters trolled Westboro by dressing as country musicians and playing “Keep It Clean” in front of their picket line outside of their Kansas City show.

In 2015, when the church protested the group’s stop in Kansas, the band shot back by “rickrolling” — playing “Never Gonna Give You Up” by Rick Astley — them over and over again.

It’s not exactly clear what the Foo Fighters have done to prompt the continued, targeted hate of Westboro, but according to the Huffington Post, the church released a press release for this boycott claiming that “The Foo Fighters have made no attempt to make their bodies a living sacrifice, holy (meaning separated from the ways of this world), and acceptable unto God, being their reasonable service.”

Regardless, trolling the Westboro protestors is starting to become a Foo Fighters tradition.

I need a "You shouldn't be hatin, you should be dancin!" bumper sticker.

Is this the one you’re talking about? They’ve trolled them a few times lol

I don't feel super strongly about the Foo Fighters, but Dave Grohl definitely seems like one of the coolest guys in music today. https://t.co/04jtcvUDHd

Remember when the Westboro Baptist Church’s antics and propaganda was considered outlandish? Now they seem downright bland compared to every conservative protest after Trump.

lol this is my hometown and I love how they have almost completely vanished since the counter protests started. This is the first time I've seen them mentioned in a year.

For years, Dave Grohl has not only been selflessly fighting Foo, here he courageously combats hate with love and disco.#Gr8ful https://t.co/O8xOCatD7B

Best of all, the entire stunt was recorded.

As for “You Should Be Dancing,” The Dee Gees released an official version of the cover on their latest album Hail Satin, and they published a video for it last month.

Tom Daley wins his second medal at the Tokyo Olympics. He did it while knitting.