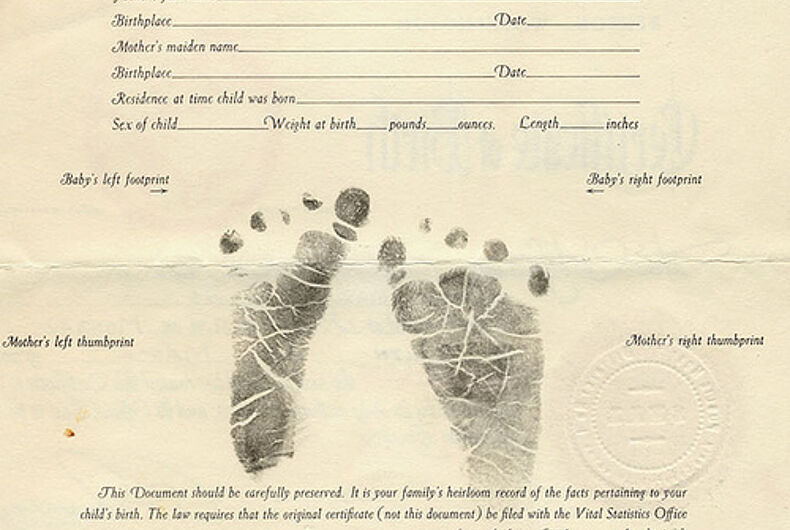 The American Medical Association (AMA) says that sex should be removed as a legal designation on the public part of birth certificates.

The group says including the information can lead to stigmatization of transgender and nonbinary people when they register for school or sports, request or file government documents, get married, or apply for a job or credit check.

The sex designated at birth would still be recorded, it just would not be part of the publicly available information. Instead, it will be sent to the U.S. Standard Certificate of Live Birth for “medical, public health, and statistical use only,” according to the group.

“Assigning sex using binary variables in the public portion of the birth certificate fails to recognize the medical spectrum of gender identity,” Willie Underwood III, MD, the author of the report said.

Forty-nine states plus Washington, D.C. allow individuals to change the sex assigned at birth on their birth certificates. Tennessee, one of the most anti-trans states in the nation, does not. Only ten states allow for a non-binary gender marker.

“We unfortunately still live in a world where it is unsafe in many cases for one’s gender to vary from the sex assigned at birth,” Jeremy Toler, MD, a delegate from GLMA: Health Professionals Advancing LGBTQ Equality, added.

Moving the information to the non-public portion of the birth certificate would reduce “unnecessary reliance on sex as a stand-in for gender” and “serve as an equalizer” since policies vary from state to state.

“We need to recognize gender is not a binary but a spectrum,” Sarah Mae Smith, MD, speaking on behalf of the Women Physicians Section said. “Obligating our patients to jump through numerous administrative hoops to identify as who they are based on a sex assigned at birth primarily on genitalia is not only unnecessary but actively deleterious to their health.”

She pointed out that the race of a baby’s parents was once recorded on birth certificates, information that led to rampant discrimination.

“Thankfully, a change was made to obviate at least that avenue for discriminatory practices,” she said. “Now, likewise, the information on sex assigned at birth is being used to undermine the rights of our transgender, intersex, and nonbinary patients.”