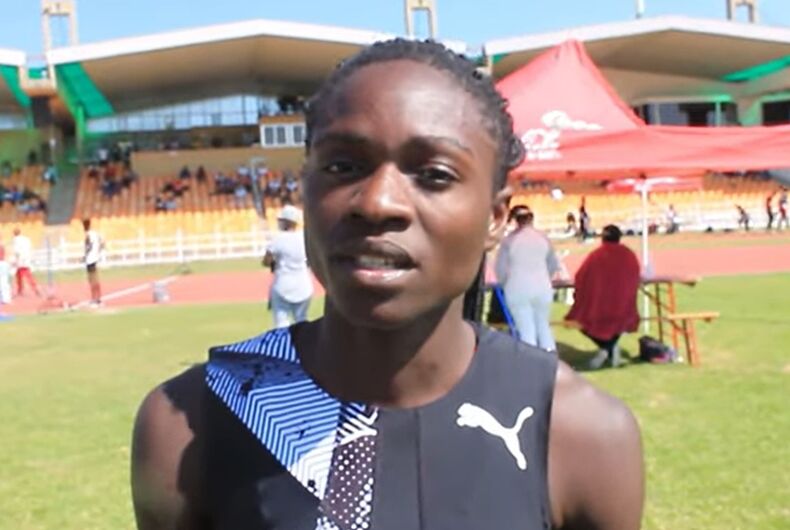 A retired Polish sprinter is demanding that Namibian runner Christine Mboma be tested “to find out if she definitely is a woman” after she won the silver medal in the women’s 200-meter dash at the Olympic games in Tokyo.

“She has the parameters of an 18-year-old boy,” Marcin Urbaś said, saying that his personal best time in the same race was 22.01 seconds when he was her age just after she ran it in 21.81 seconds, which means that he was slower at age 18 than Mboma. Urbaś is a white man and Mboma is a Black woman.

Related: Another woman with “too high” natural testosterone is disqualified at the Olympics

Urbaś, 44, said that Mboma’s “construction, movement, technique” are also proof that she isn’t a woman.

“The testosterone advantage of Mboma over other participants is seen with the naked eye,” Urbaś – who has no medical background – said.

If her body is not investigated, Urbaś said, “We will continue to think that she is fair and equal, and it is a clear and insolent injustice against women who are definitely women.”

Urbaś currently holds the world record for the 200-meter dash, which he set at the 1999 World Championships when he was 22-years-old.

Mboma was disqualified from running in the 400-meter event at the Olympics due to a naturally high testosterone level, one of many cisgender, Black women from Africa who have been blocked by the gender rules set by World Athletics, which governs track and field competitions. Beatrice Masilingi of Namibia, Caster Semenya of South Africa, Francine Niyonsaba of Burundi, and Margaret Wambui of Kenya have all been affected by the rule, which requires the women to use medications to lower their testosterone levels in order to compete.

World Athletics says that the women must be banned because testosterone gives them a natural advantage over other women, but it does not have a similar rule limiting natural hormone levels for male athletes. Athletics organizations generally don’t ban male athletes for aspects of their bodies that can give them an advantage in a sports, like being tall in basketball or having large hands and feet in swimming.

Now World Athletics President Sebastian Coe is saying that Mboma’s second-place finish at the Olympics “vindicates” the 400-meter ban and he’s thinking about expanding it to include the 200-meter dash to prevent Mboma from competing again.

“It was pretty observable that the last 30 or 40 meters were impactful,” Coe said this week about Mboma’s performance at the Olympics. “If you are finishing a 200m like that, you extend the runway… That in a way supports the judgment that was made.”

Coe is a white man, and his and Urbaś’s comments raise questions about how athletics governing bodies run by white people have been using such rules to ban Black women who win races. Both men made their comments after Mboma medaled, not before when her high testosterone levels were already known.

“As trans writers and activists have been telling us for quite some time, the concept of binary sex, that there are only two non-overlapping sexes and one is either one or the other, is not as clear cut as many claim,” wrote journalist Ruby Hamad in a 2019 column. She is the author of White Tears/Brown Scars: How White Feminism Betrays Women of Color.

“The efforts to bar Semenya also demonstrates how easy it is to undermine women, in particular racialized women, by shifting the goalposts and requirements for entry into womanhood.”