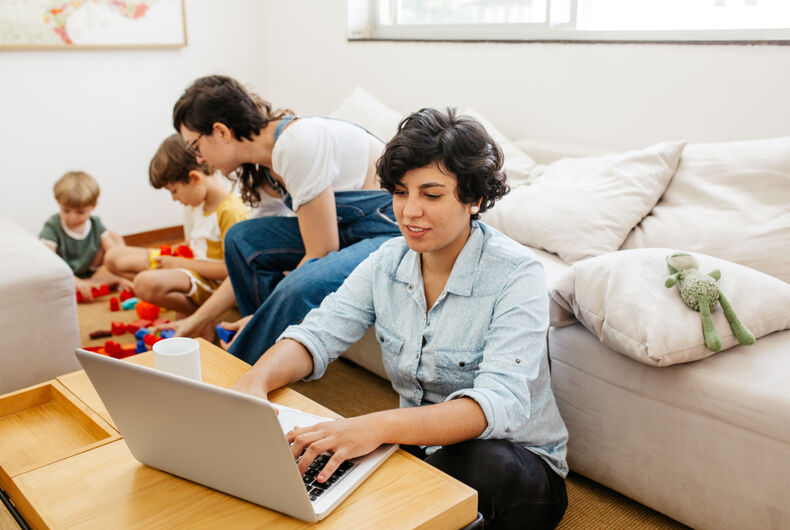 The pandemic has made remote work the norm, and even though the country is opening back up, not everyone wants to return to the office. As such, many companies are implementing hybrid work models, which offer some combination of remote and in-office work.

In many ways, a hybrid model makes a multitude of jobs more accessible – especially to workers living in rural areas. It also allows companies to recruit more geographically diverse candidates, and it can give workers better work/life balance.

Related: Almost a quarter of all workers say they know LGBTQ employees are treated unfairly

But as hybrid working models become increasingly common, there are also new challenges. Companies must now figure out how to best prioritize diversity, equity, and inclusion without leaving remote workers from marginalized communities behind.

According to the World Economic Forum (WEF), hybrid work models put groups like LGBTQ people, people of color, and people with disabilities – many of whom prefer working remotely due to the added safety and accessibility – at risk of losing out on pay raises and promotions.

Studies show that working from home actually increases productivity, but most managers will inevitably suffer from proximity bias, the common human phenomenon of favoring those you see the most. Thus, proximity bias can lead managers to believe that those who show up to the office are better, more productive workers.

The new challenge for managers, then, is to overcome that bias, as well as to foster inclusion and community across in-person and virtual platforms.

In this new hybrid world, companies need “leaders who demonstrate the ability to not only connect with but to support and empower their employees,” Rosanna Durruthy, head of global diversity, inclusion, and belonging at LinkedIn, told WEF, “whether that employee is going to be sitting in an office alongside them or that employee lives 1,000 miles away. That’s the leader who’s going to inspire their direct reports with greater success.”

In practice, Durruthy said, this does not mean treating all employees the same, but rather celebrating their unique perspectives and experiences.

Psychologist Andy Horning added that allies will also need work harder to support their marginalized coworkers, as working physically apart will make it feel easier to ignore a toxic or unsafe situation.

And allyship may be more important than ever, as remote LGBTQ workers have continued to struggle with their workplace identities. According to a survey of LGBTQ people from Indeed, 67% of respondents said remote work culture has made it harder to come out at work.

LaFawn Davis, group vice president of Environmental, Social & Governance at Indeed, said this large number is likely due in part to the fact that some LGBTQ people don’t feel safe being out at home, especially since the pandemic has forced many LGBTQ people to move in with family members who may not be accepting. LGBTQ people who normally might have used work as a place to be themselves no longer feel free to do so while working from home.

Paul Wolfe, head of global HR at Indeed, told Employee Benefit News that the added difficulty is also likely due to the fact that it is hard to feel personal connections strong enough over Zoom to share personal details about yourself.

“The separation has curtailed some of the more difficult conversations [employees] want to do in person versus over Zoom,” said Wolfe. “It’s an interesting perspective to think Zoom has brought us closer, but there’s still this physical separation that has stopped the deepening of relationships.”

So support remains crucial for remote workers, and one positive aspect of remote allyship, Horning explained to WEF, is that it may offer workers the chance to be less performative.

“We may be asked to be an ally, and no one will know about it,” Horning said.

There is still a lot to figure out with remote and hybrid working models, but because they are doubt here to stay, how best to implement diversity and inclusion across platforms will likely remain a large part of the conversation.