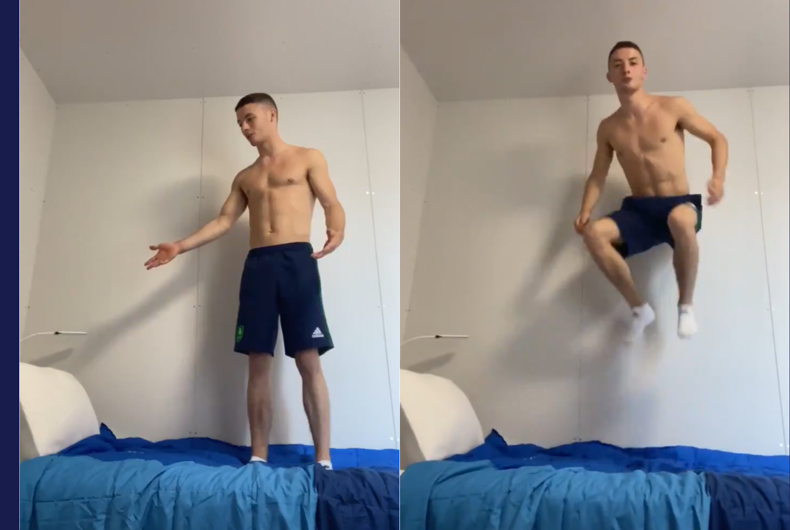 As the Olympics prepare to get underway on Friday, there’s considerable concern about the continued spread of coronavirus and how it might affect the progress of the games. Organizers in Tokyo have already removed in-person spectators from all competitions, but those concerns have led many people to speculate on how far they will go to keep the Games going.

One notion that almost instantly went viral was that the athletes were forced to sleep on “anti-sex” beds, made out of cardboard that would collapse under the weight of more than one person. If it sounds too weird and logistically impossible to be true, it’s because it is.

Temporary beds made with 100 percent recycled material are being used to furnish the rooms of athletes. They are, however, not meant to prevent them from having sex, although the Games are actively discouraging the activity.

The origin of the “anti-sex bed” concept apparently gained traction from a post by Olympic athlete Paul Chelimo, who wrote in a tweet on July 16, “Beds to be installed in Tokyo Olympic Village will be made of cardboard.” He followed up by saying, “This is aimed at avoiding intimacy among athletes.”

Chelimo made a series of jokes about the beds, but many took the tweet’s initial statement seriously and thought the beds were meant to prevent athletes from sharing a bed with anyone.

Beds to be installed in Tokyo Olympic Village will be made of cardboard, this is aimed at avoiding intimacy among athletes

Beds will be able to withstand the weight of a single person to avoid situations beyond sports.

I see no problem for distance runners,even 4 of us can do😂 pic.twitter.com/J45wlxgtSo

The “anti-sex” bed rumor got around quickly, especially via accounts — both satirical and not satirical in nature — on social media. Soon enough, it ended up being reported seriously in media outlets.

Athletes at Tokyo's Olympic village are provided 'anti-sex' beds to discourage any contact. The beds made of cardboard are designed to take the weight of one person, meaning they would break if anyone tried to share them. pic.twitter.com/WTUZ2RqEsY

i don’t think the anti-sex beds at the olympics will be well liked by the athletes but baptist colleges will love them pic.twitter.com/nLzBoxQS4M

Athletes to sleep on 'anti-sex' cardboard beds at Olympic Games amid COVID pic.twitter.com/7cREn50gnz

But as the New York Times and others reporting live from Tokyo would explain, that’s not their purpose.

The beds were planned in January 2020, long before the pandemic even caused the delay of the Games. They can hold at least 440 pounds of weight, and both the manufacturers and Olympic organizers even bragged that they may be sturdier than most wooden beds. While the bed frames are made of cardboard, the beds are furnished with not-cardboard mattresses.

Over 18,000 of them will be used between the Olympics and Paralympics over the next month. All the materials making up the bed will be recycled, with the cardboard frames being used to make paper and the mattress into plastic.

The Olympics have been discouraging “physical interaction” at the games in official guidance, including discouragement from sharing “hugs, high-fives and handshakes” with others. They’ve also decided to share about one-third of the condoms shared at the 2016 Rio Olympics and made clear that their use shouldn’t be needed until athletes return home.

21-year-old Irish Olympic gymnast Rhys McClenaghan, who’s been documenting his first Olympic journey online, made a video that just as swiftly debunked the “anti-sex” bed rumor. He jumped up and down on the bed with no problem.

“Anti-sex” beds at the Olympics pic.twitter.com/2jnFm6mKcB

The Olympics thanked McClenaghan for clearing up the rumor.

Thanks for debunking the myth.😂You heard it first from @TeamIreland gymnast @McClenaghanRhys – the sustainable cardboard beds are sturdy! #Tokyo2020 https://t.co/lsXbQokGVE

Needless to say, though, online users erupted with a series of not-so-serious remarks about the video — and the athlete in it.

honestly if this were true about the anti-sex beds my mother would have invented them 30 years ago for her four daughters https://t.co/x3SdhWddpd

They don’t need the bed, the bathtub is perfect pic.twitter.com/r3f24nKWdR

They’re olympians… THEY COULD FUCK ON THE CEILING.

They're to stop the bed from having sex

i'm not convinced. we should test it together, you know…

I am sharing this video to dispel the myth that the cheap cardboard beds are "anti sex" and not just the billion dollar Olympics industry being cheap bastards. No other reason. https://t.co/g9WtGzUHlH

I volunteer as tribute. https://t.co/BcKIRITrCq

Where can I apply to be this man’s cardboard bed? https://t.co/eqIyaL9Zde pic.twitter.com/7I2VXbBURh

There’s no person I’d trust more with this detective work than an Irish Gymnast. https://t.co/6kQzfBxpKk

DO NOT HAVE SEX WITH THIS MAN! It looks very painful! https://t.co/O0i75VoC0o

But still, this is an easy study case in how fast misinformation spreads, and how easily it can be debunked.

As writer Oliver Willis points out, however, everyone can have a part in combatting fake news, “Not everyone’s going to be as dynamic or attractive as this guy” when they do it.

this is a good media example of just grabbing a camera and doing content to counter misinformation. not everyone's going to be as dynamic or attractive as this guy so you won't get as much attn, but still, just do content – its cheap and easy. https://t.co/AUeZ1XvR08

Contrary to some reports, the recyclable cardboard beds at the Olympic Village are NOT designed to collapse & prevent athletes from having sex (which is strongly discouraged due to Covid-19). #Tokyo2020 is a greener games, relying on renewable energy & minimizing waste. https://t.co/BcHkmoAEvh