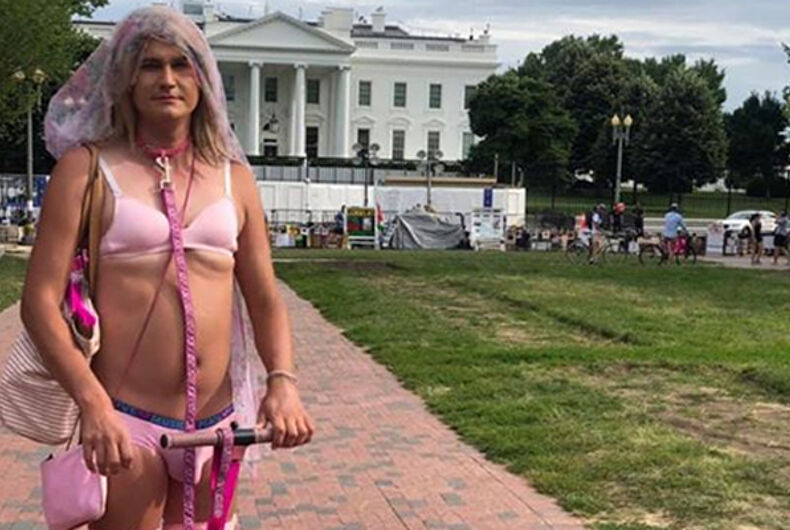 A Photoshopped photo of a mentally ill transgender woman has started spreading in Washington D.C. The doctored photo inserts the woman, known as Sissy Gracie, into one of Getty Image’s iconic pictures from inside the Capitol as insurrectionists raged through the building.

The man who altered the image, a local photographer, is now expressing remorse that his “inside joke” meant for a handful of friends has started being shared widely.

Gracie, who now lives in North Carolina, was a fixture on D.C. streets as she rode her pink Segway all around the city begging for “contributions to a local transgender charity.” She kept any money given to her.

Casa Ruby, a local bilingual and multicultural organization that provides social services and programs for transgender folks and people of color. Ruby Corado, a longtime local trans activist and founder of the organization, has clarified that the group had no relationship with Gracie.

Gracie’s standard outfit – a crop top, small underwear, and long stockings. She also frequently wore a veil and almost always wore pink because it makes her “feel like a fairy princess.”

Gracie was frequently in trouble with the law. She would aggressively demand money from pedestrians and if they refused, she would frequently try to run over the person with her Segway. She currently faces charges in D.C. for three separate counts of simple assault and making threats.

In one of the cases, a man told police Gracie ran over his foot and hit him in the head last summer when he told her to stop harassing people.

“I meant no confusion in the matter,” the unidentified photographer told the Washington Blade.

“I made it as an inside joke to distribute to a select few people privately,” he said. “People took it and ran with it and misrepresented it. I did my best to make sure people understood it is satire.”

The fake photo used the above photo to insert Gracie behind the fur-clad “Q Shaman” and two other insurrectionists in the iconic photo of the riot. LGBTQ Nation is not publishing the photo to avoid contributing to the spread of disinformation.

Gracie regularly posted photos of herself out and about town wearing her pink outfits along with videos of herself asking women if she could “worship” their feet.