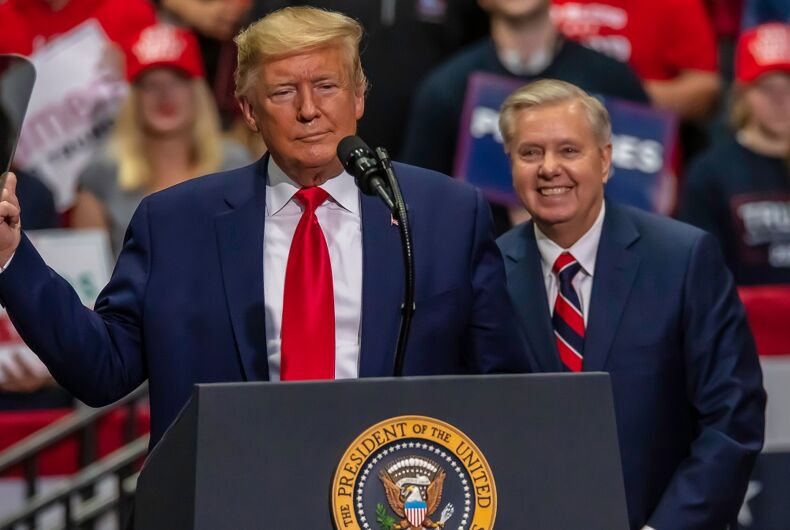 Out CNN anchor Don Lemon ripped into Sen. Lindsey Graham (R-SC) for the lawmaker’s blatant hypocrisy when it comes to Donald Trump. When Graham ran for president, he was one of Trump’s sharpest critics, but after the election, Graham put on his happy face and has been one of the president’s biggest cheerleaders.

After Trump supporters stormed the Capitol building in a desperate bid to stop the certification of the Electoral College vote in favor of President-elect Joe Biden at the president’s bidding, Graham claimed on the Senate floor that “Enough is enough!” and “Count me out!” when it came to Trump. And then a few days passed.

Graham was spotted coming out of the White House and flew with the president on Air Force One to a rally in Texas. The last-minute visit by Trump will likely be his last as Commander-In-Chief.

Rep. Filemon Vela, (D-TX), had asked the president to cancel his trip, but Graham and the seditionist president he had just condemned were undeterred.

“President Trump, who orchestrated last week’s treasonous riots on the U.S. Capitol, is scheduled to fly to the Rio Grande Valley,” Vela said. “With a nation in crisis in the wake of a mob attack on the nation’s capital and reeling from an uncontrollable pandemic, President Trump is employing precious government resources to highlight his atrocious border wall. The President should cancel this trip and focus on bringing harmony to this country in his waning days.”

Lemon mockingly referred to Graham as “lapdog Lindsey” and said the senator, who is assumed to be a closeted gay man, “sure had some tough talk” before Trump won the election, playing clips of Graham denouncing Trump as a “bigot” and “unfit for public office.”

But Lemon quickly switches to show examples of times Graham “got on the President’s crazy train” before flipping back to show Graham’s indignant speech on the Senate floor the night of the riots.

“‘Enough is enough,’ huh?” Lemon asks right before showing video of the senator leaving the White House to travel with Trump.

And then with a look sharp enough to cut, Lemon sums it up with one word said with the inflection that everyone has heard a gay man use at the end of a good takedown.

"Tell us how you really feel"

CNN's @DonLemon speaks on the evolution of Sen. Lindsey Graham, who was critical of Donald Trump before he was elected president, but has since been an ally to Trump. https://t.co/faXlGh3mcJ pic.twitter.com/FYwlrsp3jM