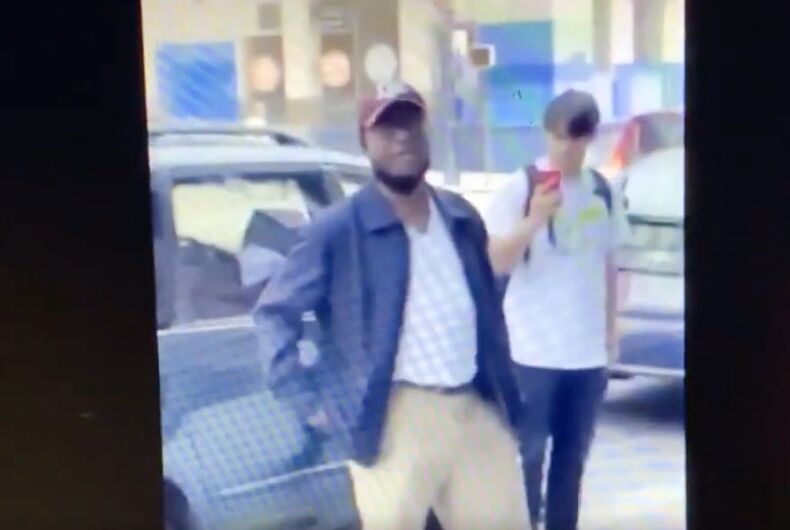 Hate crimes against both LGBTQ people and Asians have dramatically increased recently, but a mixed race San Francisco couple got a double whammy when a man on the street started to yell racist slurs at them. One of the men is Asian.

The couple sought refuge in a nearby hotel and called police as passersby tried to intervene and calm the man. Locals say the man regularly harasses LGBTQ people and may be mentally ill.

“I’m gonna whup your fucking ass and his fucking worthless ass,” the man can be heard saying in video recorded during the confrontation.

“You’re worthless,” one of the men shoots back.

“No your mother was worthless because she didn’t abort your sorry ass,” the man retorts.

The man continued to hurl slurs even after the men had retreated inside the hotel. And when someone call him a racist, he exploded.

“I served this goddamned country,” he yelled. “So I’m not racist! I don’t like you fucking Asian motherfuckers in my country!”

When another pedestrian tried to distract the man, softly saying, “Hey brother,” the foul-mouthed assailant turned on them.

“I’m not your brother!” he screamed before leaving the scene.

“I think San Francisco is better than this,” Darren Mark Stallcup, the man behind the camera told local news. “Things escalated pretty quickly. I’m pretty surprised no one got physically hurt, but there was a lot of crazy things that were said.”

Trans woman attacked while walking her dog in her apartment complex