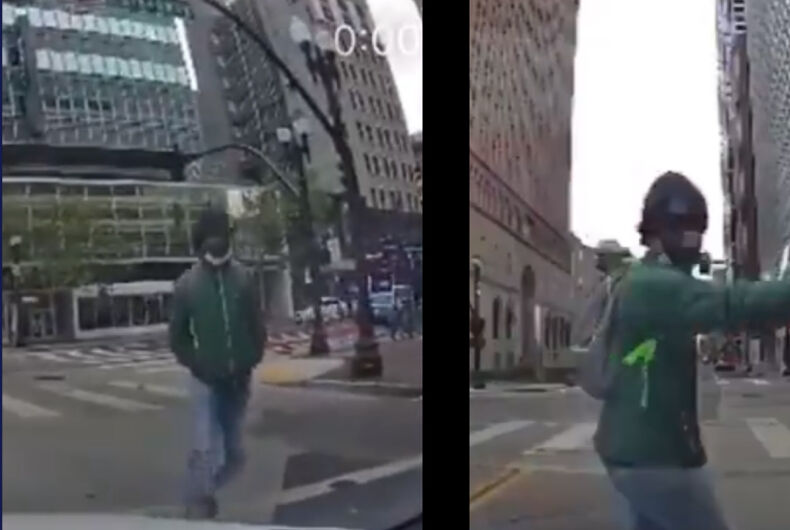 The menace that spit then circled an Asian couple's car at a stop light.Photo: Screenshot/Twitter

An Asian couple in California, including a woman who is nearly seven months pregnant, is shaken after they were brazenly attacked by a pedestrian as they stopped at a stop light.

The two are heard on footage having a casual conversation after dropping off a relative moments before the assault. Before their car is even fully stopped before a crosswalk, a man walks up to the passenger side of the car and spits directly on the woman, whose name is Tina.

While they’re stunned, the man circles around the car and then shows up on the driver side, attempting to compel the driver — Tina’s husband — to step out the car to fight. She persuades him not to.

When he doesn’t respond to the assailant’s request, he pulls in front of the vehicle, yelling “faggot” and other slurs. They would share the footage of the event with a Twitter page dedicated to bringing attention to anti-Asian crimes.

A man spits into the eyes of a pregnant Asian woman at a red light in downtown Oakland and then uses a gay slur as he asks the victim to get out of the car. Video sent to me by the victim. @TaylorBisackyTV @AmandaHari @KRON4Desk @KTVUdesk @KGOdesk @AzenithKTVU @nbcbayarea pic.twitter.com/VW9qNdRgbI

The Oakland woman later spoke to the news about their ordeal. The woman reported that she went to work right after and “had a meltdown.”

“After he was yelling at us and shouting at us and that’s when I felt like this was because we were Asian and because our windows were down it was a perfect time to target us,” Tina explained to KRON4.

“It was terrible. I had a meltdown at work,” she said. “Right when I got to work I washed my face, I did an eye wash, I made sure nothing was on me and then I spoke to my providers, you know I had a mini meltdown.”

Tina did not want to share her face but shared her story to speak out against hatred.

After the attack, she got a COVID-19 test and checked with doctors. She reports that she’s okay physically.

Adding that she and her husband are healthcare workers in Oakland’s Chinatown, Tina said, “I see grandmas and grandpas every day coming in, you know, to our clinic, because of the same reasons.”

That’s why “now is the perfect time to stand up for ourselves we have to advocate for ourselves so I hope this helps others to do the same.”

Tina reported the incident to the Oakland Police Department as well and organizations tracking hate motivated crimes. They have not said if they have a suspect or if an arrest has been made.