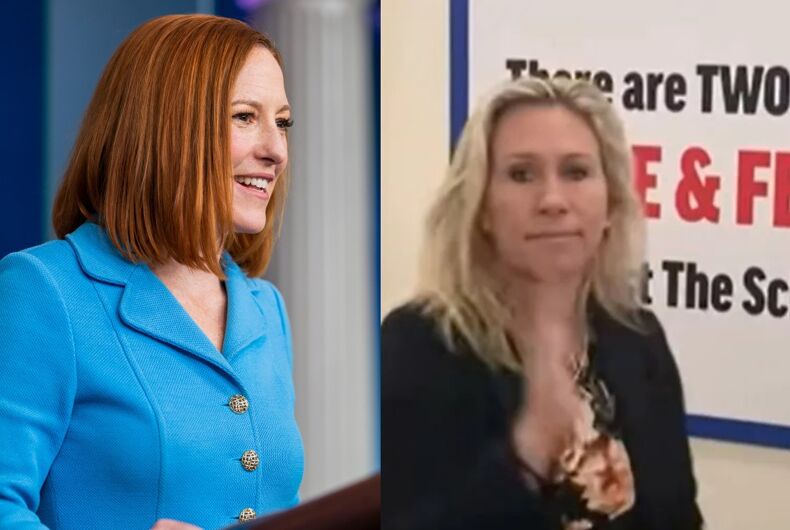 “We don’t take any of our health and medical advice from Marjorie Taylor Greene,” she said in a CNN interview.

Greene, who is a sitting member of the U.S. House, was enraged yesterday when President Joe Biden said that there would be a program that involves health care workers going door-to-door to encourage people to get vaccinated against the COVID-19 virus, a measure that can help people who are either too busy to go get a vaccine themselves or who just need a nudge in the right direction to help protect public health and their own health.

“Biden pushing a vaccine that is NOT FDA approved shows covid is a political tool used to control people,” Greene tweeted. The FDA has authorized use of the vaccines available in the U.S.

“People have a choice, they don’t need your medical brown shirts showing up at their door ordering vaccinations,” she continued. “You can’t force people to be part of the human experiment.”

“Brown shirts” is an expression for members of the early Nazi Party’s paramilitary group Sturmabteilung (SA), which helped Adolf Hitler rise to power in the years that led up to the Holocaust. They used intimidation and violence to disrupt opposition political parties and scare political opponents and oppressed minorities like Jews, immigrants, and Romani.

Biden pushing a vaccine that is NOT FDA approved shows covid is a political tool used to control people.

People have a choice, they don’t need your medical brown shirts showing up at their door ordering vaccinations.

You can’t force people to be part of the human experiment. https://t.co/S8qlstuSqL

A CNN journalist stipulated that the door-to-door health care workers that Biden was talking about won’t force anyone to get a vaccine they don’t want, but asked Psaki about why Biden’s plan is raising hackles among Republicans in general.

“What does [Greene’s] statement really say to you?” he asked Psaki.

“We don’t take any of our health and medical advice from Marjorie Taylor Greene,” Psaki quipped. “So I can assure everyone of that.”

She then moved on to describing the benefits of the program.

“It’s up to every individual to decide whether they’re going to get vaccinated,” she said, adding that increasing the vaccine rate will help fight new COVID-19 variants.

Republicans have spent the last year comparing even the most basic measures put in place to reduce transmission of COVID-19 to Nazism.

Rep. Greene herself was the center of controversy for comparing the House of Representatives’ attempts to get staffers vaccinated to Nazism.

“Vaccinated employees get a vaccination logo just like the Nazi’s forced Jewish people to wear a gold star,” Greene tweeted in May, adding that the House’s mask mandate is like when Jews “were put in trains and taken to gas chambers in Nazi Germany.”

Greene faced widespread criticism for her comments and in June she visited the Holocaust Memorial Museum in D.C. and apologized for her “offensive” remarks, saying she understood that “there’s no comparison and there never ever will be.”