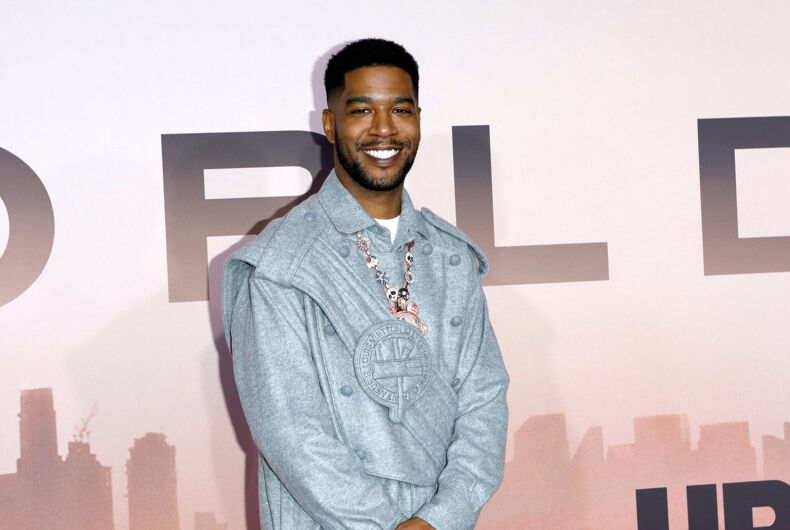 Kid Cudi at the "Westworld" Season 3 Premiere at the TCL Chinese Theater IMAX on March 5, 2020 in Los Angeles.Photo: Shutterstock

Grammy-winning rapper Kid Cudi took to Twitter this weekend to address the toxicity and negativity he receives on his social media when he posts a picture of himself with painted fingernails.

The cisgender straight musician is known for defying gender roles, such as when he wore a dress during his Saturday Night Live debut performance in April, as a homage to late rockstar Kurt Cobain. But he admitted that he “got tired” of dealing with the continued attacks over his appearance.

It started when Cudi posted a selfie across social media, including Instagram. Wearing a Star Wars-like helmet, he captioned the picture “Mando Cud.”

Cudi is holding up the peace sign, and two of his fingernails are shown — manicured and painted with nail polish, one in orange and the other in blue.

The picture has gotten nearly 160,000 likes on Instagram, and comments under Cudi’s post regularly receive thousands of comments from his 2.9 million followers.

The post also came on the anniversary of one of his earliest and biggest hits, “Day n’ Nite,” which turned the rapper into a global sensation. But instead he spent the day dealing with haters over his nails.

The comments under this post were enough for the entertainer to remove all of them from the post entirely.

Cudi then posted a tweet, stating, “[I] Turned my comments off on instagram. Seems people really have a problem w me painting my nails. I got tired of blockin so many accounts.”

That’s when he made clear that he doesn’t want the support of anyone that has an issue with how his hands look.

“I really need u to understand, if u dont like me doin this or anything I do, please dont buy my albums, dont come to my shows. Fuck way off.”

Turned my comments off on instagram. Seems people really have a problem w me painting my nails. I got tired of blockin so many accounts. I really need u to understand, if u dont like me doin this or anything I do, please dont buy my albums, dont come to my shows. Fuck way off.

The post earned Cudi an outpouring of support for fans for the next few days.

Many expressed the problem with toxic masculinity in hip-hop and in America overall, and some even showed off their own manicured nails or appearance that challenge stereotypical gender norms.

Many even quoted Cudi himself, using comments he made on an episode of the HBO show The Shop: Uninterrupted, right after his SNL performance in the Cobain-inspired dress.

“This is so funny, this is crazy that I’ve stirred it up like this,” he said at the time. “If this is what I’m supposed to do, then so be it. I want to be a disruptor, I want to fuck shit up. And it’s cool, because I’m also giving confidence to the kids and telling them to be themselves and do what they want to do.”

It doesn't matter what you post anymore, people will find something to criticise. It's a weird mentality, but it's pervasive on social media

I'm sorry you've had to experience it. It's weird energy

Do what you want, Cudi, painted nails are absolute king shit

Your nails started a great conversation between the Husband and I. He wants to paint his nails. I’m looking at nerdy nail wraps because I ❤️ him. Thanks for helping him see it’s ok.

Masculinity is about being confident in yourself, it does not matter if you wear a dress, paint your nails or wear a Gucci bucket hat. Is about being comfortable in your skin. I salute you cudi for being yourself No matter what. Huge inspiration .

Bro I wasn’t gonna post anything but I got a pedi w my girl today and it was glorious. I didn’t take a pic after but i got my toenails painted black. I’m bouta do my fingernails in solidarity. pic.twitter.com/CQxWoCu5bI

Did some birthday nails for yesterday, first time doing some form of nail art, I love it. Nail polish is for everyone pic.twitter.com/j9PeK4AeYm

What color should I paint my nails next cudi pic.twitter.com/BQ7LP8CgkM

Started getting done mine the beginning of this year, and let me tell ya fuck the haters lol. Also here’s my favorite set that I’ve gotten so far. pic.twitter.com/tTfIZyx9IQ

Kid Cudi is far from alone from receiving hateful responses and homophobic attacks for doing something that isn’t considered to be “manly” behavior.

Actual people that identify outside the gender binary, and other out entertainers such as rapper Lil Nas X, regularly deal with anti-LGBTQ, bigoted remarks.

We love you! Ignore the haters, they're insecure with their own masculinity and putting other men down makes them feel better about themselves. They're weak AF.

I painted mine cuz of you man! You said it best: pic.twitter.com/mp9PT7VWOf

it’s 2021 and y’all still give a fuck about guys painting their nails😐 ITS PAINT https://t.co/rug3HYua00

Don’t listen to them Cudi 🥺 pic.twitter.com/93vU8pZRhl

love you so much, keep doing u as always pic.twitter.com/0VuRWWmYez

Love the nails!!! Still waiting for you to drop a Cudi Nail Polish Line !!!👀

An open letter to President Biden & Secretary of State Blinken