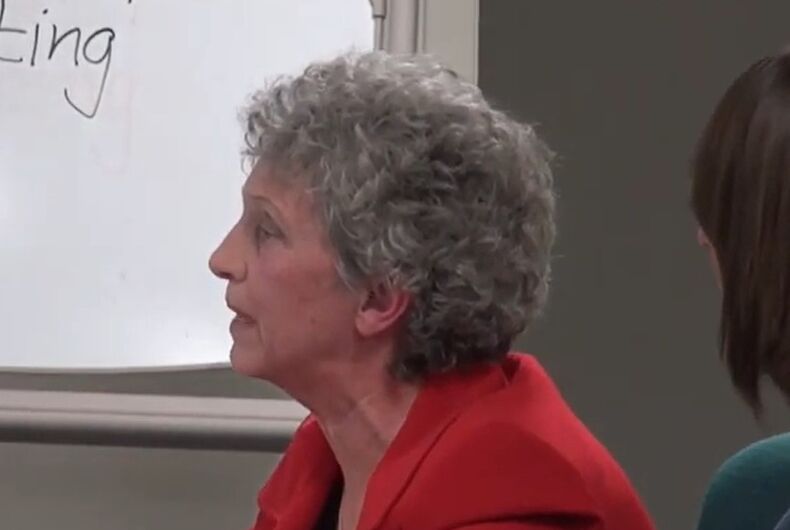 A rightwing, anti-LGBTQ activist who tried to stop her state from distributing coronavirus vaccines has died due to complications from COVID-19.

Linda Zuern of Bourne, Massachusetts passed away last week at age 70 at a hospital in Boston. She had to be flown to the hospital due to her severe case of COVID and was in a coma at the end of her life, breathing through a ventilator. She was not vaccinated against coronavirus, according to people who knew her.

“She was a strong woman who believed in speaking the truth and defending our freedoms in America,” said Republican State Committeewoman Deborah Dugan (R), a close friend of Zuern. Many people who knew her described her as a staunch conservative who worked to stop immigration, supported Donald Trump, and helped with a variety of local conservative causes.

“She did so much for all the conservative causes,” said former Massachusetts Republican Assembly President Mary Lou Daxland.

But in the end it was one of those conservative causes that cost her her life.

Zuern recently protested against the state’s “VaxBus,” which helps get vaccines to people in rural areas of Massachusetts.

She spent three terms as a member of the Barnstable County Assembly of Delegates. At one of the last meetings this past December, she advocated for more doctors to use hydroxychloroquine to treat coronavirus, despite the fact that clinical trials showed that it was ineffective and has negative potential side effects. The idea that the government is suppressing information about the effectiveness of the malaria drug in fighting coronavirus, though, has become an article of faith for some opponents of the vaccines.

“That’s just a concern of mine that politics has gotten into the way of really helping people who are sick,” she said, accusing the Barnstable County Department of Health and the Environment of not looking into preventative measures to keep people from catching COVID-19.

At the meeting, the department’s director Sean O’Brien said that they were working on two proven preventative measures – testing and the nascent vaccine rollout.

“When she got involved with something she gave it her 110% and that stood out,” former County Commissioner Leo Cakounes told the Cape Cod Times about Zuern.

“She did her homework and knew what she was talking about,” he added. “She put her time in.”

Her Facebook feed shows what kind of homework she was doing. She spent the past several years sharing links to articles on disreputable websites promoting conspiracy theories and outlandish YouTube videos.

Many from this past year were about claims that President Joe Biden stole the election from Donald Trump, that the January 6 Capitol insurrection was actually the work of leftist activists, and that the “Deep State” has been trying to remove Trump from office because he opposes child sex trafficking too much.

Zuern also took time to oppose LGBTQ equality. She spoke out against her state’s ban on LGBTQ conversion therapy, which she called “evil” and “offensive to parents, Christians, conservatives and moral people.”

“Another politician taking away your parental rights,” she wrote, linking an article about the conversion therapy ban. “The government knows best on how to raise one’s child! Sounds like socialism to me.” 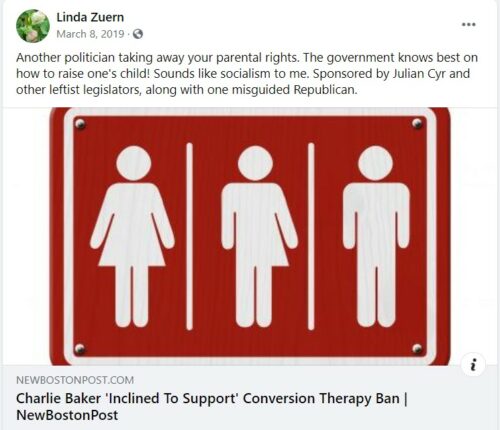 In 2019, as part of her work on the Barnstable County Assembly of Delegates, she was one of three delegates to vote against a resolution condemning hate speech against all minorities.

The resolution was a response to local Republican Commissioner Ron Beaty, who tweeted that “gay politicians” are “too self-absorbed and self-centered to adequately represent ALL of their constituents.”

Zuern called the resolution – which did not remove Beaty from office or even censure him – a “witch hunt.” She talked about how he was just exercising his “free speech” and said that calling Trump “evil” or calling someone a “bigot” is the real hate speech, and she even claimed that the anti-hate speech resolution itself was “hateful.”

The streaming video of the meeting shows her colleagues laughing at her as she talked (video below).

Zuern went to South Dakota to visit her mother and, when she was returning to Massachusetts, both she and her mother developed COVID-19 symptoms. Her mother survived.

Beaty, the commissioner whose anti-LGBTQ tweets inspired the hate speech resolution, said that it was “a shock that we lost her.”

“She was a leader among leaders,” he said, suggesting that a street or a building in Bourne be named after her. “She was one of the forthright women leaders not only on Cape Cod but southeastern Massachusetts.”