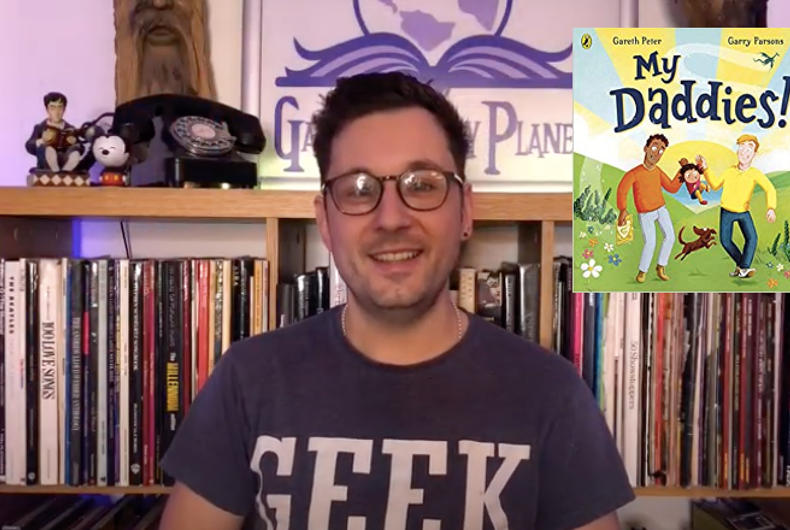 To show the importance of Pride Month, U.K. author Gareth Peter – who wrote the April 2021 children’s picture book My Daddies! – has revealed the hateful messages he has received in response to his book.

His book is about an adopted child and their two fathers. Peter wrote it after he noticed a lack of children’s books showing families like his, which includes his partner and their two kids. However, as soon as he began promoting the book online, he started receiving hateful anti-gay messages bashing the book as irreligious and harmful to kids.

“I genuinely pray for you to see the light of God’s love 🙏 My daddies will not go far, as is a distorted image of family⛔ You may think is all good love and free to love anybody I want 💜💙💚💛🧡❤️💗But the kids are the ones that will be affected for life, as it will roll down in generations,” one commenter wrote.

Another person commented, “And we wonder why kids can’t even tell what gender they are.”

One other wrote, “Why oh why do you feel the need to shout about your sexuality its irrelevant to writing a book dddooooohhhh.”

One even rolled out the old chestnut, “Adam and Eve Not Adam and Steve”.

Peter told Pink News that when he began sharing his book in Facebook groups, he felt “overwhelmed by the love and enthusiasm for it.” But he began receiving hateful messages too. While they didn’t surprise him, they still saddened him.

“I am hoping that more visibility of LGBTQ+ representation will help this and allow these kinds of comments to vanish in a puff of rainbow smoke,” he said.

Do we still need #pride ? Do we NEED books like My Daddies? Here are some of the messages I received when announcing our book 🌈#PrideMonth #lgbt #twodads @BeingLGBTQPod @BootstrapCook @stephenfry @PeterTatchell @RealMattLucas @CalumMcSwiggan @SamWiseLGBT #Equality #love pic.twitter.com/c8N8NcM7Qz

Supportive commenters on Peter’s Twitter thread encouraged him to ignore the haters and continue on with his work.

“Disgustingly negative and selfish comments from those people. Please don’t let it stop you with what you’re doing and the message you’re putting out to people 🙌🙌,” one Twitter user named Mark Stevenson wrote.

Yet another user named Tony Moore wrote, “You don’t deserve that kind of negativity mate. Very small people with very small minds. Everyone deserves to be happy and I’m confident that you and Mark are doing a great job raising two wonderful kids.”

One commenter wrote, “Don’t let this stuff get to you mate. Writing a book like this will make a positive difference in the lives of many kids and families. Unfortunately not everyone understands that but some people just prefer to live in 1921 instead of 2021. Keep doing what you’re doing.”