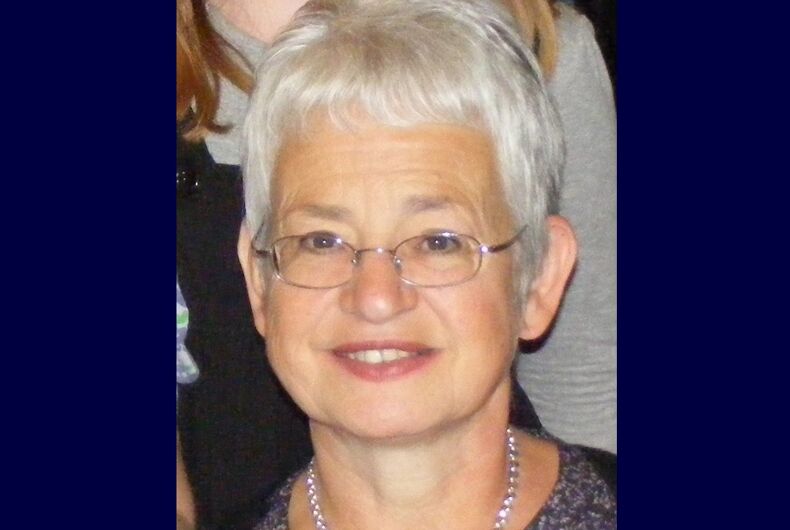 Author Jacqueline Wilson just came out in an interview with The Guardian and talked about her partner Trish, who she has lived with for nearly two decades.

Wilson has written over 100 children’s novels, including the Hetty Feather series and the Tracy Beaker series, which was developed into a television show in the U.K.

When Wilson was 19, she married a man and had a daughter with him. But their marriage fell apart in the 2000s and she moved in with Trish.

Wilson’s latest book is Love Frankie, which is about a tomboy named Frankie who falls in love with “the prettiest girl in her class,” Sally. She said that she knew “perfectly well that [the book] would shine a little light on my own private life.”

The book is “a truthful, honest book about a girl falling in love with another girl.”

For herself, she said that she was never really in a closet, so her coming out won’t be news to people who know her personally.

“I’ve never really been in any kind of closet,” she said. “It would be such old news for anybody that has ever known anything much about me. Even the vaguest acquaintance knows perfectly well that we are a couple.”

She said that her mother was “appalled” by her relationship with Trish.

“That wasn’t too devastating for me because my mum cordially hated my ex-husband; she didn’t really approve of any of my friends.”

Her coming out, she insists, won’t help any teens out there struggling with their identities.

“I don’t think that girls would ever want a grey-haired, wrinkly writer as a role model if they were wanting to feel good about maybe being gay,” she said. “I’m sure they could find much more glamorous examples.”

One commenter on Autostraddle, though, disagreed and said that she would have loved a connection with someone “like me” when she was a teen.

“If I’d known then that the already grey-haired, albeit less wrinkly, then-50-something-year-old writer of some of my fave books on my bookshelf was gay… that would’ve changed EVERYTHING,” she wrote.

“It still kind of does change everything. I’m 31 and I feel validated as fuck.”