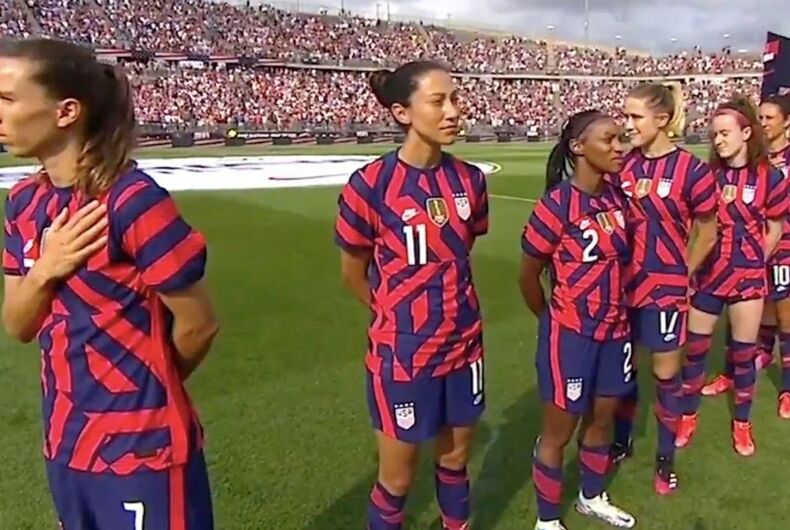 The U.S. Women's Soccer team during the July 5 performance of the national anthem.Photo: YouTube screenshot

Right-wing websites have been pushing a fake news story about the very queer U.S. Women’s National Soccer Team (USWNT). The story claims that the team protested the national anthem by “turning their backs” on the U.S. flag and on Peter DuPré, the World War II veteran who performed the song on the harmonica, at their July 5 match against Mexico.

Images taken from the team’s match showed athletes either facing the flag or facing DuPré as the anthem played. After video of the event hit the web, The Post-Millennial, a far-right site, posted a tweet calling out “disgraceful behavior from some members of the U.S. Women’s National Team as they turn their backs” on the anthem.

However, the U.S. Soccer Federation quickly responded to the false claim on Twitter, writing, “Not true. No one turned their back on WWII Veteran Pete DuPré during tonight’s anthem. Some USWNT players were simply looking at the flag on a pole in one end of the stadium.”

The USWNT’s Twitter account also tweeted a video showing team members greeting DuPré after their match and even signing a soccer ball for him, Media Matters reported.

Nevertheless, numerous right-wing figures began repeating the lie, accusing the women’s team of disrespecting the anthem and a veteran.

While conservative media regularly pushes disinformation, this incident has also shown its specific ire, both for the women’s soccer team and for athletes who demonstrate against injustice in the United States by protesting during the national anthem.

The team’s current 18-member roster includes at least five out players: Adrianna Franch, Ali Kreiger, Ashlyn Harris, Tierna Davidson, and Megan Rapinoe. In 2019, Rapinoe angered then President Donald Trump and other conservatives by answering “No fuckin’ way” when asked if she and her teammates would visit the White House after winning the World Cup.

Trump responded by tweeting, “Megan should never disrespect our Country, the White House, or our Flag, especially since so much has been done for her & the team.”

“The spewing of hate and the ‘othering’ of the rest of the country has only led to more strife between people and more despair and more anxiety and more fear going forward,” Rapinoe said at the time.

In a July 7, 2019 conversation with Chuck Todd on Meet the Press, Rapinoe said, “I think Trump’s message excludes people that look like me—and are me, of course. But it excludes a lot of people in his base, as well. And I think that he is trying to divide so he can conquer, not unite so we can all conquer.”

During his presidency, Trump and other right-wingers said that athletes like Rapinoe, who protested the national anthem by taking a knee on-field while it played, were disrespecting the anthem and veterans who had fought for American freedoms.

In September 2017, Trump called predominantly Black football players who kneel during the national anthem “sons of bitches,” insulting the players and their mothers as well.

Pride in Pictures: Turning my life around