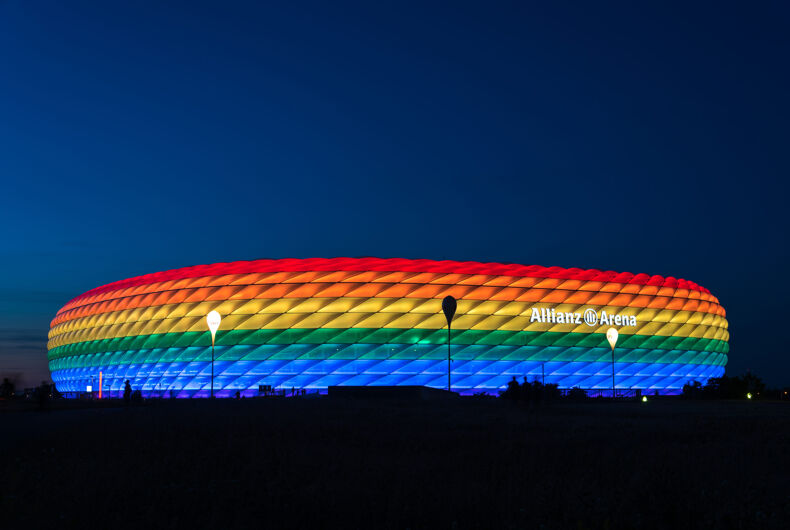 In a powerful show of LGBTQ solidarity, thousands of German soccer fans decked themselves in head-to-toe rainbow to attend a controversial match that took place in Munich against Hungary.

It started when the Union of European Football Associations (Uefa) rejected Munich Mayor Dieter Reiter’s request to light the Allianz Arena in rainbow colors. Reiter wanted to express support for the LGBTQ community in the face of a new discriminatory law passed in Hungary that bans LGBTQ content in schools and on television for children under eighteen.

Related: The Vatican is attacking an LGBTQ rights bill in unprecedented act of political meddling

In a statement, Uefa explained that it rejected Reiter’s request for being too political.

“The mayor outlines the reasoning behind this request to be a political decision which has been taken by the Hungarian parliament. However Uefa, through its statutes, is a politically and religiously neutral organization. Given the political context of this specific request — a message aiming at a decision taken by the Hungarian national parliament — Uefa must decline this request.”

Reiter called the decision “shameful,” and Germans across the nation were filled with anger.

Claudia Roth, Vice President of Parliament, said the Uefa was “trying to define what the social political role of sport and sporting events are, in the manner of autocratic strongmen,” the Guardian reported.

“Which values will be left to the campaigns of Uefa against racism or homophobia in future?” Roth added.

No rainbow lights? No problem!

The night of the game, German fans decked out in fabulous rainbow outfits filled the arena. They donned flags, masks, boas, wigs, and knee socks. LGBTQ rights organizations passed out flags and vendors sold Pride merchandise outside the stadium.

During the Hungarian national anthem, one fan even sprinted across the field waving a Pride flag (the fan was eventually tackled by security).

Oh wow! One spectator just ran on with a rainbow flag during the Hungarian national anthem. Loud cheers from the Germany block pic.twitter.com/EDJzdV0tbx

And it didn’t stop there.

German soccer clubs across the country lit up their stadiums in the rainbow that night. The mayor flew rainbow flags from city hall and lit up a wind turbine near the Allianz Arena. Munich shopping centers flew rainbow flags, and Germany’s largest newspaper, BILD, made their entire back cover a rainbow melded with the German flag.

UEFA prohibited Munich from lighting up the Allianz Arena in rainbow colors for Germany’s match vs. Hungary today.

So stadiums across Germany lit up 🌈 pic.twitter.com/n4ULhgVqkr

What a cover @BILD 👏 pic.twitter.com/820blVhXJL

5 things we love about the True Name® feature