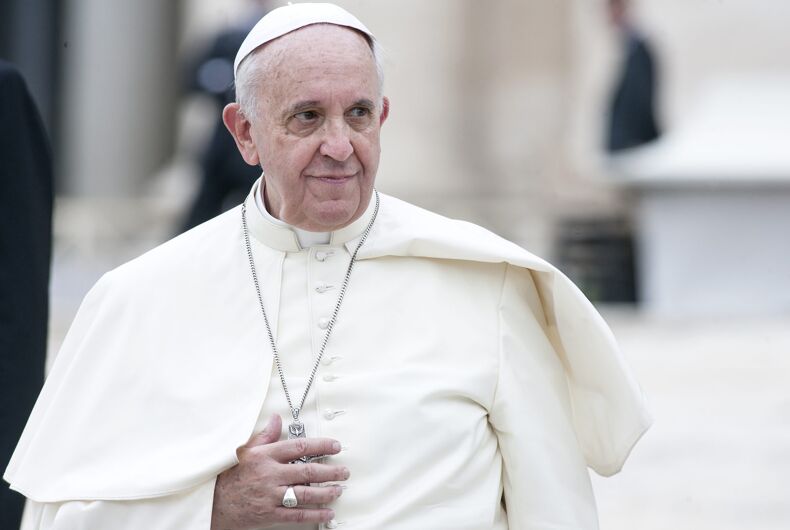 In a shocking and unprecedented move, the Vatican is trying to stop an LGBTQ rights bill from passing in Italy.

On June 17, the Vatican foreign minister delivered a letter protesting the bill to the Italian embassy to the Holy See (the Church’s jurisdiction). The Vatican claims that the bill would infringe on the religious freedom of Italy’s Catholic Church.

Related: Senators call for the federal government to apologize for past anti-LGBTQ policies

The “Zan bill,” as it is named for its sponsor, Alessandro Zan, has already been approved by Italy’s lower house of Parliament and has now moved on to the Senate. It would classify anti-LGBTQ violence as a hate crime and increase anti-discrimination protections for LGBTQ people. It would also create a national day of awareness for LGBTQ violence.

The bill has caused quite a stir in Italy. Passionate protests have erupted from both proponents and opponents, and even some feminist groups are against it due to anti-trans beliefs.

According to the New York Times, the Vatican claims the bill is a violation of the 1929 Lateran Treaty, which established the Vatican as its own sovereign state. An updated version of the treaty ensured the Catholic Church was free to execute its mission and beliefs.

An anonymous official from the Vatican’s Secretariat of State explained the Vatican’s beliefs that the bill would violate the Church’s right to religious liberty and force it to allow women into the priesthood, teach gender theory in Catholic schools, and expand its definition of marriage beyond one man and one woman.

The official stance of the Roman Catholic Church maintains that “homosexual acts” are “intrinsically immoral and contrary to the natural law.”

Pope Francis has expressed some support for the LGBTQ community in the past, including support for civil unions, but he also recently said that the Church cannot bless same-sex relationships because they’re sinful.

Conservatives siding with the Church against the “Zan bill” also believe it will criminalize them for their lack of support for LGBTQ adoption and marriage equality.

“We say ‘yes’ to loving whoever you want and ‘yes’ to the fight against discrimination and ‘yes’ to punishing any form of violence,” said far-right Italian political leader Matteo Salvini, according to Reuters.”But we are against any censorship or trials for those who believe that mother, father, and family are at the heart of our society.”

The Church’s meddling like this in Italian politics is an “unprecedented act,” church historian Alberto Melloni said. “This is not a sermon, it’s a diplomatic, a political act.”

In the past, the Vatican has expressed discontent with laws after they have passed, but it is extremely rare that it actually tries to stop one. It seems the threat of LGBTQ people being seen as equal was simply too much for the Church to bear quietly.

Pride in Pictures: Partying through a rainbow-streaked Iceland