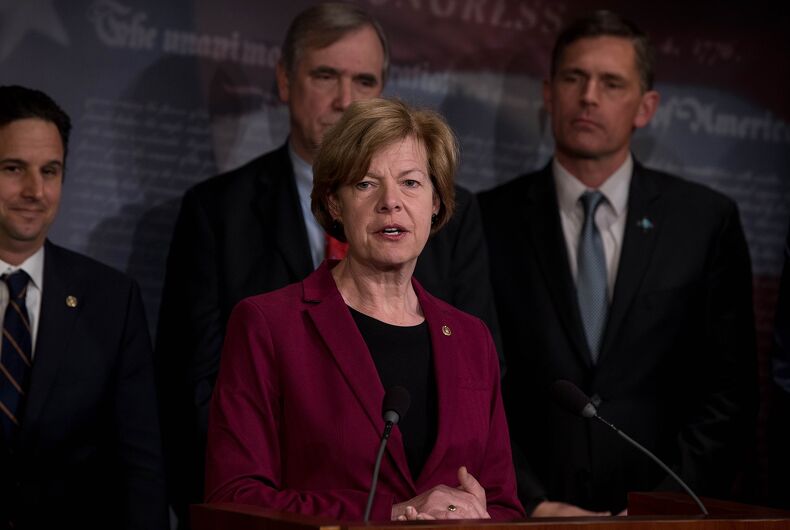 Sen. Tammy Baldwin speaking alongside other Senators at a press conference about climate in 2019.Photo: Senate Democrats

18 Senators are introducing a resolution that, if passed, would formally acknowledge and apologize for “the mistreatment of, and discrimination against, lesbian, gay, bisexual, and transgender individuals who served the United States.” That would include anyone who served in the Armed Forces, the Foreign Service, or a civil worker for the federal government.

It specifically refers to, and seeks to apologize for, the ostracization of federal employees who were outed, and their families, during the Lavender Scare of the late 1940s, 1950s, and 1960s — as well as Don’t Ask, Don’t Tell, and the “continued” harassment of LGBTQ people in the government by the CIA, NSA, and State Department until 1995.

Sen. Tim Kaine (D-VA) introduced the resolution, and 17 other senators co-sponsored the introduction. Out Sen. Tammy Baldwin (D-WI) is among them.

The resolution, as introduced, would officially recognize that “the Federal Government discriminated against and
terminated hundreds of thousands of [LGBT] individuals … for decades, causing untold harm to those individuals professionally, financially, socially, and medically, among other harms.”

If adopted, it also “reaffirms the commitment of the Federal Government to treat all military service members, Foreign Service members, veterans, and Federal civil service employees and retirees, including LGBT individuals, with equal respect and fairness.”

It does not, however, admit any liability or support any claim of action against the United States government filed by those persecuted LGBTQ servants.

The Lavender Scare was the active search and outing of LGBTQ people that worked in the military in the post-World War II federal government. It served as a pretense for the overall Red Scare and McCarthyism that reached its heights in the 1950s, and drastically affected progress towards LGBTQ rights.

The American Psychological Association deemed homosexuality a mental illness in 1952 in the middle of the Lavender Scare, and that would not change for over 20 years. President Dwight D. Eisenhower issued an executive order that said “sexual perversion” was a fireable offense in 1953. Even when the anti-LGBTQ sentiment of leaders in the government faded, LGBTQ people could still be expelled solely based on their sexual orientation or gender for decades after.

“Don’t Ask Don’t Tell” was a policy adopted in the 1990s that sought to allow lesbian, gay, and bisexual people to serve in the military, but only if they did not come out, which did not formally end until 2011. Advocates are currently pushing for legislation that recognizes the harm caused by this policy, and out Rep. Mark Takano (D-CA) introduced legislation in the House calling for the creation of a committee into these matters.

The resolution acknowledges that trans people that served in the military or sought to were “harassed and excluded” until 2014, when President Barack Obama issued Executive Order 13672, prohibiting discrimination based on sexual orientation and gender identity within the government and its contractors. The State Department formally apologized for its actions during the Lavender Scare in January 2017, under outgoing Secretary of State John Kerry.

The resolution does not mention or specifically include the period where President Donald Trump banned trans people from serving in the military from 2017 until this year, when Joe Biden took office.

“Throughout our history, far too many people serving our nation have lived in fear of retribution or persecution because of their sexual orientation. It’s time to acknowledge the harm caused to these Americans, their families, and our country by depriving them of the right to serve as federal civil servants, diplomats, or in the Armed Services,” Kaine said in a statement on June 18.

“This Senate resolution takes a stand on the side of respect for LBGT Americans who have served our nation, and reaffirms our commitment to treat all public servants with fairness and equality, regardless of their sexual orientation or gender identity,” Baldwin added.

“As we celebrate Pride Month, I take great pride in being a part of this effort to move our county forward as we join together with a shared commitment to the idea that with each passing day, and each passing year, America should become more equal, not less.”

The resolution, based off an estimate by historians, reflects that at least 100,000 people and their families fell victim to anti-LGBTQ discrimination and prejudice practiced by the government.

It’s not immediately clear when it will come to a vote or if it will have the requisite support to pass a vote in the Senate.

Pride in Pictures: Why I volunteer

“Uncle” George Takei admits he “regrets” not being a father. Then the internet responds.