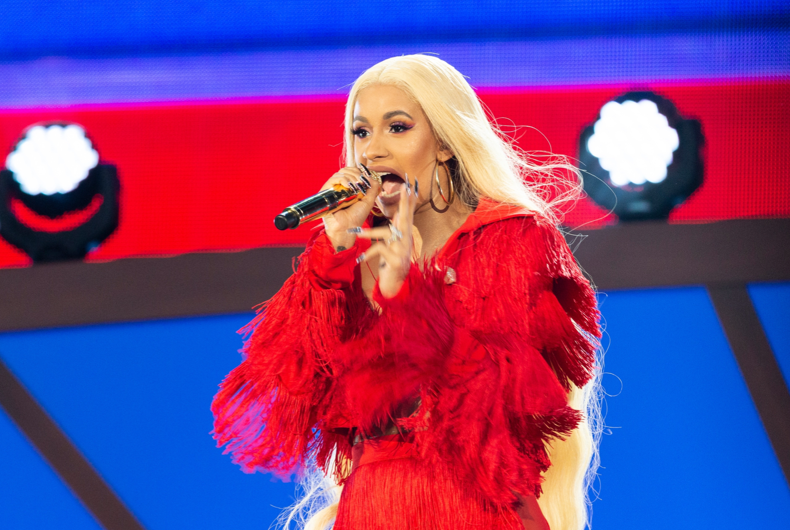 Cardi B had some thoughts on the term “queerbaiting.”

The rapper, who came out as bisexual in 2018, responded to an article by Rolling Stone detailing pop stars of late and allegations they face that they are “gay-baiting” or “queerbaiting.”

Related: Cardi B goes off on “idiot” conservative that was rambling on about her “WAP” performance

Queerbaiting is best defined as someone feigning interest in same-sex romances to capitalize on both a lack of representation of, and a growing support for, LGBTQ people — especially in media. In the article, filmmaker Leo Herrera is quoted as defining queerbaiting as an instance where “a celebrity or a public figure capitalizes on the suspicion that they may be romantically involved with another same-sex person for the sake of publicity, promotion or a capitalistic gain.”

Cardi B wasn’t the focal point of the Rolling Stone article, which detailed recent allegations against pop singer Billie Eilish and the Pixar film Luca, but also musician Normani for her recent single and music video “Wild Side,” both of which feature Cardi. In the music video, Normani and Cardi “are pictured naked and gyrating against one another,” according to Rolling Stone, which suggests it’s another instance of alleged queerbaiting.

She added that she had been pregnant (something she revealed publicly at the BET Awards) when it was time to film the music video. “You do know we was trying to hide a whole baby bump right ?”

The article also mentions previous allegations against Cardi, Rita Ora, Bebe Rexha, and Charli XCX for their 2018 song “Girls.” The song received criticism from LGBTQ people and artists about its lyrics that presented bisexuality as a way to titillate straight men.

Both Cardi and Ora came out after the allegations that they were “queerbaiting” then. Ora’s coming out is noted by Rolling Stone, but not Cardi’s.

“Also I’m married to a man but I have express soo much about my bisexuality and my experiences wit girls,” she added in her initial tweet. “All of a sudden ‘queer baiting’ is the new word & people use it to the ground !”

Uuummmm @RollingStone queer baiting? You do know we was trying to hide a whole baby bump right ?Also I’m married to a man but I have express soo much about my bisexuality and my experiences wit girls .All of a sudden “queer baiting” is the new word & people use it to the ground ! https://t.co/M3kn4NyJBs

Cardi would write another tweet about the topic of “queerbaiting” in general, calling it a “new” term that she feels is putting “pressure” on entertainers to come out publicly, or otherwise pretend to be straight.

“I don’t like this new “queer baiting” word,” she said. “I feel like it pressure artist to talk about their sexuality or their experiences that they don’t feel comfortable speaking about.”

She added, “If [an] artist kiss[es] a girl [in] a video does that means she gotta show videos & text wit wit other women?”

I don’t like this new “queer baiting” word.I feel like it pressure artist to talk about their sexuality or their experiences that they don’t feel comfortable speaking about.If a artist kiss a girl on a video does that means she gotta show videos & text wit wit other women?

As Rolling Stone‘s article notes, it’s not exactly a new term, and has origins outside of pop culture.

“People also have to decipher the difference between those who are performing for the heterosexual lens and queerbaiting, which are very different,” Jesus G. Smith, a professor at Lawrence University, told the publication.

The article even dismisses the allegation that Normani was queerbaiting as false, stating toward the end, “In the age of social media, however, sometimes people are loud and wrong in projecting misguided accusations, similar to the ones Eilish and Normani faced.”

Several other artists who aren’t out, but have been accused of queerbaiting, such as Nick Jonas and Ariana Grande, are also noted in the article. Even Madonna’s outcry that she “did it first” following Lil Nas X’s on-stage kiss while  performing at the BET Awards is mentioned.

Ultimately, the article — and Herrera, in recent Instagram posts cited by Rolling Stone — notes that the issue to blame is the lack of adequate representation of LGBTQ people in media more than it is on individual artists.

“[We’re] tired of decades-old scraps repackaged as ‘visibility,’” Herrera said in one post. “Scraps are for famines. We are not starving. Queers have feasts in our history and banquets in our closets. Keep your fucking scraps.”