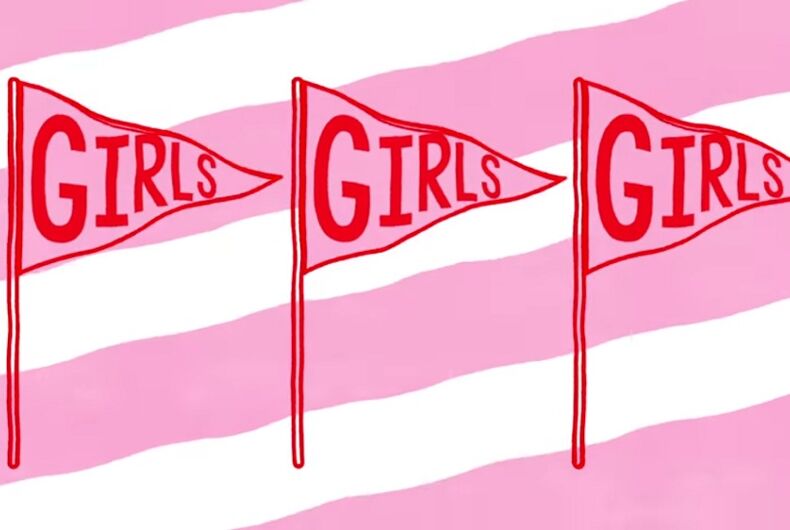 British singer Rita Ora – along with Cardi B, Bebe Rexha, and Charli XCX – has released what she hopes will be a bisexual anthem this week.

Ora’s new song “Girls” is about… loving girls “50/50.” The pop lyrics reference bisexuality and the chorus is fairly straightforward:

Ora told People that she hopes it’ll be a bisexual anthem: “I definitely want it to feel like it’s an anthem to somebody. I want there to be a sense of freedom for anyone who listens to it.”

But when the magazine asked Rita Ora if she’s bisexual or fluid, she said the question was “very narrow-minded.” “I don’t think that that even matters,” she said.

Some other singers, though, are pointing out that the lyrics might be too problematic for an anthem.

Actor and singer Hayley Kiyoko, who identifies as gay, posted a statement on Twitter. After saying that she supports artists “who are opening up more and more about their sexual identities,” she said that the lyrics left her with a “knot in [her] stomach” and are “tone-deaf.”

“A song like this just fuels the male gaze while marginalizing the idea of women loving women,” Kiyoko wrote.

She also took particular issue with the chorus and its reference to red wine. “I don’t need to drink wine to kiss girls; I’ve loved women my entire life. This type of message is dangerous because it completely belittles and invalidates the very pure feelings of an entire community.”

Kehlani, who recently came out as queer, tweeted that certain lyrics “weren’t progressive.”

“hate to be THAT guy but there were many awkward slurs, quotes, and moments that were like ‘word? word,’ she wrote.

“My concern is that if this is her trying to do it because it’s a bit sexy or a bit fun then it sort of sounds like it’s undermining bisexuality as a serious thing,” Sam Neath of Bi Pride UK told BBC.

In the interview with People, Ora said that “Girls” was inspired by “I Kissed a Girl” by Katy Perry, a 2008 song that was accused of presenting bisexuality for male titillation.

Perry’s song “isn’t problematic because it promotes homosexuality, but because its appropriation of the gay lifestyle exists for the sole purpose of garnering attention—both from Perry’s boyfriend and her audience,” wrote Sal Cinquemani in Slant at the time.

“That was the first song anyone heard of Katy Perry’s, and it was just such a statement; it was so fun,” Ora said. “I wanted to do something that was in that lane.”

“Being bisexual – when I’m with a girl you get a lot of attention from men who assume you’re just doing it to attract them,” said Neath, the bi activist, about “Girls.”

“Rather than actually accepting that it’s a true genuine feeling to someone of the same gender, this song seems to completely undermine that and says we just do it for fun and to attract other men.”

Why Melania’s anti-bullying campaign should focus on LGBTQ youth

Here’s some good news: The religious right is shrinking