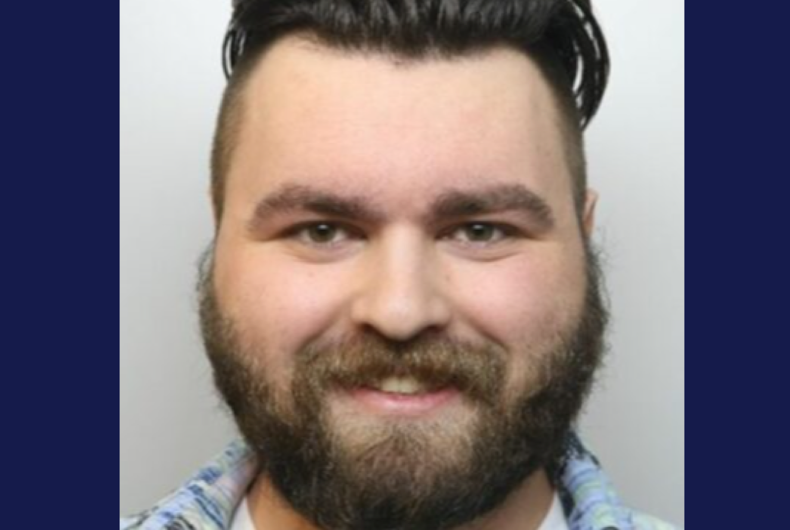 Andrew Dymock, a former college student accused of being a member of neo-Nazi extremist organizations, was convicted on multiple charges of encouraging terrorism and hatred last month. A court sentenced him to a minimum of seven years behind bars, with an additional three years to be served unless he is granted parole.

Dymock had claimed that he was innocent, in part because he’s bisexual, which is “in direct conflict with Nazism.”

Related: Gay man thought he was going to die in terrifying gang attack

According to the BBC, sentencing judge Mark Dennis told Dymock that he was “intelligent” but “wholly misguided” and “driven by an extremist mindset” toward “total hatred and bigotry.”

“It is clear you were a leader and not a follower,” Dennis said from the bench.

Dymock was first arrested on 15 criminal charges in June 2018 while attempting to flee the United Kingdom for the United States. One of his charges included encouraging “hate on the grounds of sexual orientation.”

For years, he had led two neo-Nazi extremist groups through social media and online discussion platforms. Prosecutors claim that Dymock had ran the Twitter for the System Resistance Network (SRN), a recognized neo-Nazi organization, and wrote some of their material.

Dymock also allegedly set up a dedicated PayPal account for the website, contributing to the fundraising efforts of the group. He also spread extremist material on a website he set up and coordinated with other extremist groups online between 2017 and 2018 — all while in college.

Dymock was alleged to have founded SRN, which called homosexuality a “disease” and has “zero-tolerance” to non-whites, Jewish and Muslim communities. He was ousted from the group and by 2018 had went on to found another neo-Nazi organization prior to his first arrest. SRN was banned in England in 2020.

Upon his arrest, Dymock was found to have neo-Nazi material (including “books, flags, clothes and badges”) in his possession, and online activity exploring extremism dating back at least to when he was 17.

When his trial began in the Criminal Court of England and Wales in May, it was revealed that that Dymock had denied all the accusations and told investigators upon his arrest he was innocent because of his sexual orientation. He allegedly said, “I am bisexual but lean towards being homosexual, in direct conflict with Nazism.”

He also reportedly told officers that he believes Nazis are “not far right” and said of the books in his possession, “I would be offended if someone called me a Nazi. Mein Kampf and Siege are for my research.”

His coming out as bisexual came as direct contradiction with some of his supposed writing, which included an article called “homosexuality, the eternal social menace.”

In court, Dymock wore two Pride badges, while claiming that he was being set up by his ex-girlfriend, who allegedly had tried to recruit him into a neo-Nazi group but failed, and set him up as a result.

At trial, Crown prosecutors produced photos of Dymock giving Nazi hand salutes, promoting extremist messages, and waving Nazi and neo-Nazi flags. They also displayed articles for “encouragement of the eradication of Jewish people” produced online, such as one entitled “truth about the Holocaust” that included images of the former Auschwitz concentration camp.

Prosecutors produced texts to a girlfriend, where Dymock said he dreamed “I went around the Wild West executing faggots with a .44 magnum revolver.”

Other hate-fueled statements Dymock is alleged to have said included that “we did not finish the job” in reference to the Holocaust, referring to Jewish people as “a cancer on this earth,” and calling gay people “degenerate scum” via the Twitter account.

Dymock also allegedly kept a copy and distributed a video where SRN members ran around town plastering “posters of a Nazi holding a noose over Southampton Pride adverts.” Another video in his digital archives included two people burning a Pride flag.

The jury voted to convict on all 15 charges, including 12 terrorism-classified allegations. When he was convicted, Dymock allegedly said aloud to the jurors, “Thanks for killing me.”

At his sentencing, Judge Dennis noted that “Despite all the advantages” Dymock was born with, such as being the son of a microbiologist and a professor of dentistry at Bristol University, he decided to “take the path of dreadful bigotry, intolerance and hatred towards other members of our society solely on the basis of their race, creed or sexual orientation.”

Dennis said that Dymock was “prepared to inflame such vile prejudices in others and to promote and encourage hatred and violence towards other human beings in furtherance of your distorted and wicked cause.”

Dennis gave Dymock, now 24, a seven year sentence, in addition to a three-year “extended licence,” which keeps him behind bars beyond his initial punishment although he’ll be eligible for release based on evaluation.