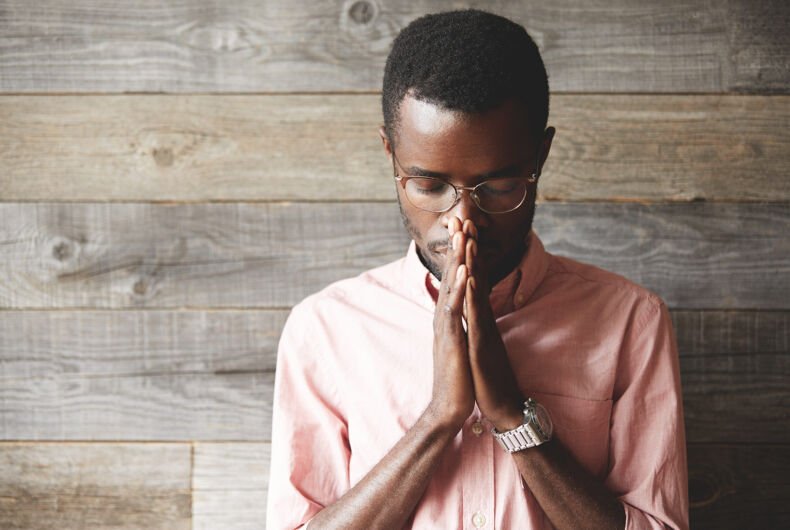 Every once in a while a reader will ask me to issue a response to their questions in my column. On this occasion, a LGBTQ Nation reader asked me, “What should be the mandate for today’s Black Churches?” The question suggests someone — I am hoping maybe a churchgoer or leader, a homophobe having second thoughts, or a LGBTQ Christian struggling to come out — wants a comprehensive response.

One of the mandates for today’s Black churches should be addressing its ongoing struggle with accepting the spectrum of human sexuality.

In 2021, I am still asking these three questions: Why can’t many in the African-American community tell the truth about our sexuality? What price do we pay in telling the truth?

Lastly, what role does the church play in not only perpetuating unsafe sexual behavior, but also demonizing of members of the LGBTQ community?

Over decades of prominence in America, the Black church has long purported to preach and practice a prophetic social gospel. However, in truth, the church still preaches and practices a heteronormative conservative gospel, tethered to a model no longer relevant to a younger generation that embraces LGBTQ+ social justice issues.

Like in many cultures, sexuality has not always been a comfortable topic of discussion in the African American community. This is due primarily to slavery, and what we appropriated from white society about sexual behavior to deem ourselves human beings in our oppressors’ eyes.

First bred as cattle during slavery, and later either touted as sex sirens or taunted as sex predators, the sexuality of Black people has almost never been welcomed in an environment free of abuse, violence, and stereotypes. The raping of Black women and the lynching of Black men in this country by white men have kept the control of Black bodies away from us.

In carving out a racial identity after slavery, African-Americans did so, often at the expense of leaving our bodies and sexualities behind. Since then, with the church’s embrace of tenets of fundamentalist Christianity, embedded an asexual theology, has continued to hold our bodies and sexualities imprisoned. They were once systematically usurped by white slave masters, and are now ritualistically harnessed by the Black church with a “politic of silence.”

Sadly, adopting these values were viewed as a revolutionary act against the oppressive white gaze. But what is the result when churches, communities, and families where people lose touch with their bodies and sexualities?

Sexuality is an essential part of being human. However, our silence, shame, and stigma around issues of sexual identity, gender expressions, and sexual practices have allowed for behaviors of denial, neglect, and abuse.

For one, the Black Church played a part in the death of African Americans with AIDS with its appalling and unconscionable silence on the issue — so too, was its various forms of  homophobic pronouncements that denigrate both LGBTQ+ people and women.

The lack of pastoral care long contributed to high-risk sexual behaviors and the transmission of HIV/AIDS in the African American community.

Another answer is that members of Black churches continue to stay on the “down low.” The most significant factor that keeps the Black Church on the down-low are closeted, homophobic ministers. Pastor Donnie McClurkin, a three-time Grammy winner as a gospel artist — and the former poster boy for African-American ex-gay ministries — is one example.

McClurkin’s sexuality has been an open secret, but now, at 61 years old, McClurkin is lamenting about growing old and being alone. While the Black LGBTQ community could applaud someone of McClurkin’s status telling the truth about his sexual past, many of us can’t care because of decades of damning and damaging messages he hurled at us.

However, there might be some light at the end of this tunnel. This month, the African Methodist Episcopal Church, the oldest Black denomination in America, dating back to 1787, will convene a committee to study LGBTQ issues. They plan to examine scripture and doctrine, and conduct hearings where the testimony of LGBTQ individuals will be provided.

Some of us in the Black LGBTQ community feel the effort is more than “a day late and a dollar short” because much of a younger generation has already left the church behind. However, I am hopeful.

Right now, Black churches are in a crisis. The AME Church is now the first to address it openly, but others have contributed to the “politic of silence” culture. That’s mainly because they not only lack the language to talk about sex, but they also still deem sex as a private and personal matter that has no part in the Black Christian community when it comes to loving God and ourselves.

The Black church, however, is also uniquely positioned to significantly bring knowledge and affect change to attitudes, beliefs, and behaviors within their congregations and, by extension, the entire African American community. If churches helped their congregants live their sexual lives through faith-based sex education curriculum and embracing the concept that sexuality is an integral, God-given part of being human, it would make a difference at the core of how we interact with one another.

Research has shown that sexuality education programs in Black churches would delay the onset of sexual activity among teens, and thus would reduce the number of partners among teens and adults, significantly decreasing the incidence of sexually transmitted diseases and unplanned pregnancies.

All this is possible — if first, the church can address its struggle.

California Republicans wanted to honor Nancy Reagan for a year. This bi Democrat wasn’t on board.