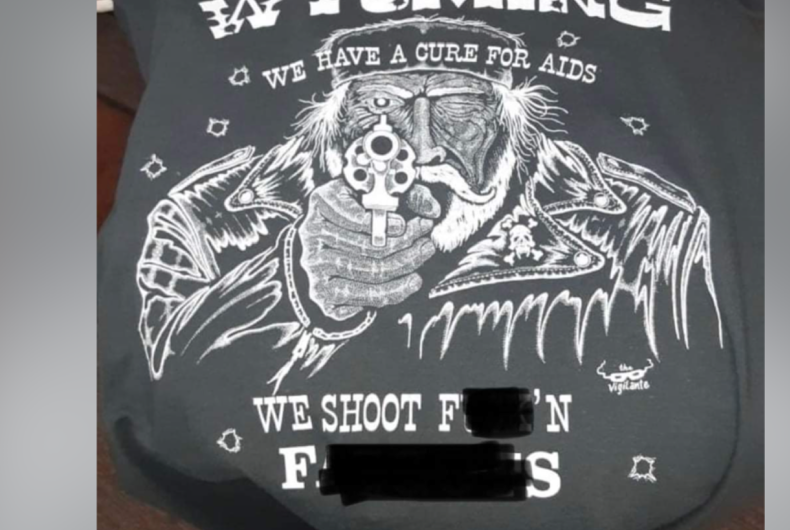 A bar has sold shirts that claims shooting gay people is "a cure for AIDS," using a homophobic slur.Photo: Screenshot/Wyoming Equality

To say that a bar in Wyoming, known as “the Equality State,” isn’t living up to the state’s nickname is an understatement.

The bar is selling a shirt that says “In Wyoming, we have a cure for AIDS.” The supposed “cure” in Wyoming is, according to the shirt, “We shoot fuck’n faggots.”

The words are written around a drawing of a man, wearing a biker jacket with a skull on the lapel, pointing a revolver. The shirt’s design has a mark on the bottom right that reads “The Vigilante.”

The bar that produced the shirt that calls for shooting and killing gay people has not been named. The LGBTQ organization Wyoming Equality wrote on Facebook that they “failed to convince a local bar to pull these shirts from circulation.”

They chose not to name the bar as to avoid giving them “notoriety” for the product, which may lead homophobic patrons to rally around the business which will then “sell more shirts off the pain of our community.”

However, the Cowboy State Daily reported that the bar in question is the Eagle’s Nest in Cheyenne, the biggest city in the state.

Wyoming Equality also asked people not to protest the business. Instead they want people to support Wyoming Equality as they are “working with a number of businesses and leaders to make sure that our message of dignity and equality continues to be shared.”

“We hoped that they would choose to stop selling them when they realized the harm it did to the LGBTQ community and those living with AIDS,” Wyoming Equality said, but that hope fell short.

“It is a sad day. Wyoming Equality understands that… this sucks.”

Commenters suggested that they contact the bar’s distributors and ask them to stop supporting the bar. “Our friends at the Human Rights Campaign are helping us with this,” the group responded.

The bar’s owner, Ray Bereziuk, later told the Cheyenne Post that he “sold out” the shirt and that he doesn’t plan on reordering them, for now, because he’s “in the bar business, not the apparel business.”

The Daily reported that Eagle’s Nest is geared toward motorcyclists in the community. It’s not clear how long they have sold the shirts or if they are the sole producers of them.

The Movement Acceptance Project (MAP) ranks Wyoming as one of the lowest states in pro-LGBTQ policy.

The town of Laramie in Wyoming was the site where 21-year-old college student Matthew Shepard was beaten, robbed, and tortured, before being left for dead in October 1998.

During the trial of his assailants, it was widely reported that Shepard was targeted because he was gay. Shepard’s murder brought national and international attention to hate crime legislation at both the state and federal levels.

Despite the shock and lasting influence of Shepard’s death across America in regards to homophobia and hate crimes, Wyoming has still failed to enact hate crime legislation almost 23 years later.

Wyoming Equality’s executive director Sara Burlingame, a former state legislator, said on social media that she would rather use this opportunity to inspire Wyomingites to take steps toward protecting LGBTQ people instead of sparring anti-LGBTQ people.

“Want to make it unpopular to be a bigot? Donate to Wyoming Equality or Wyoming AIDS Assistance. Put a pride flag up in your business or home. Wear one of our cool AF shirts. Pass a Hate Crime bill. Invest in queer joy and resilience,” she wrote.

“Let the haters hate in their own misery. Keep Wyoming queer and wild.”