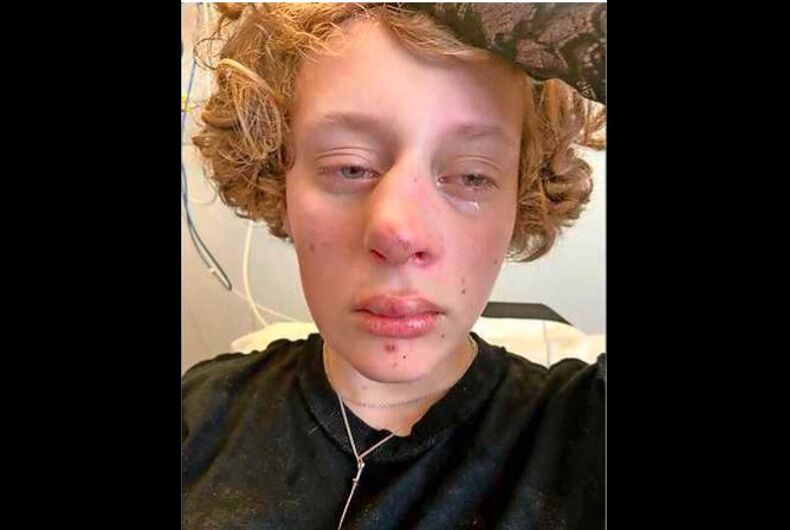 Amsterdam police have announced the arrest of a teenage boy for attacking a 14-year-old girl in an LGBTQ-related hate crime. The vicious attack left her with a broken nose and fractured jaw.

Paul Brink posted photos of his daughter Frédérique on social media and detailed what had happened. The brave girl took a beating when she refused to reveal her gender to a stranger.

Related: These kids had questions about trans athletes. So they asked one.

“Are you a boy or a girl?” her attacker yelled at Frédérique according to Brink.

“It doesn’t matter,” she replied.

When the boy asked the question again, Frédérique replied, “I am who I am and you can be who you want to be.”

Frédérique’s father wrote that he is “incredibly proud” of her because she “wants to be who she is.”

“Boy or girl, straight, gay or bisexual, she (and all of us) doesn’t care. My child is not transgender, but just says she is who she is.”

Frédérique has been hailed as a hero for her thoughtful and stoic response to the bully, but Dutch LGBTQ organizations say it’s part of an uptick in violence against the community.

The hashtag #Frédérique quickly swept the internet as social media users on multiple platforms praised the girl for standing up for herself. Her matter-of-fact response to the boy has been lifted up as the perfect rejoinder.

“An #LGBTQ hate crime where the victim AND the perpetrator are CHILDREN is a crime that demands ALL of us teach more, protect more, and love more,” noted American activist Cornell Brooks tweeted, “Our hearts should break for a 14 yr girl attacked for her gender identity, intelligence & kindness.”

“Everyone should be able to reach their full potential, regardless of their gender identity, gender expression, and sexual orientation,” the Dutch Human Rights Ambassador tweeted with a graphic of Frédérique’s response to the bully.

14 y/o got beaten up because she refused to answer the question "are you a boy or a girl". Truly disgusting. I support #frederique. #nooneowesyoushit#jemagzijnwiejijwilzijn

For those who are living under a rock, may I introduce you to #Frédérique, beaten to a pulp, but stronger than all of us put together. You are awesome! Stay strong!!

14-year-old was asked “are you a boy or a girl” before being attacked? via @tech2s https://t.co/T2Xhq3ghnw

To that beautiful soul that was broken by being herself. Pick yourself up darling. Prove to those ignornant savages that you are worth more. That you are WHO YOU WANT TO BE🥰 #frederique #bullying #EnoughIsEnough #fyp #Nederland #bewhoyouare

I support you #Frederique! Everyone deserves to be the best version of themselves no matter what that version is. This should be the new normal. #jemagzijnwiejijwilzijn I am also happy you have parents that support you in your choices. You have a friend in me. pic.twitter.com/1DvNa5hYow

14-year-old #Frederique was assaulted in the #Netherlands for simply stating: ‘I am who I am’, when being asked if she is a boy or girl.https://t.co/tv3u6I36Vk pic.twitter.com/fKNhERIfuB

Everyone should be able to reach their full potential, regardless of their gender identity, gender expression, and sexual orientation.#HumanRights4All #LHBTI #LGBTI 🏳️‍🌈 pic.twitter.com/yjHh14k8uz

Our hearts should break for a 14 yr girl attacked for her gender identity, intelligence & kindness. #frederique #frederiquebrink https://t.co/ALojFDhgKR