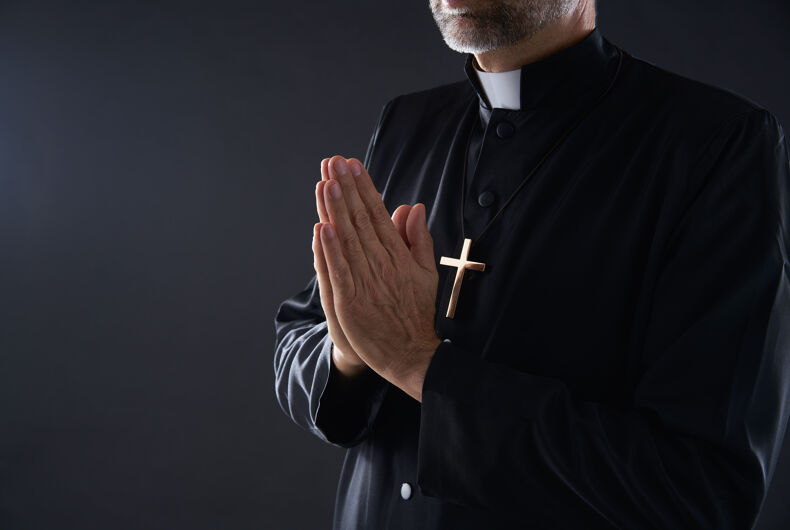 Monsignor Tony Anatrella, an 80-year-old anti-gay French priest and advisor to the Vatican on human sexuality, is currently on trial by the church. He stands accused of having sex with male clients in private counseling sessions where they sought to get rid of their homosexual desires.

Since the 1980s, Anatrella has written about a dozen books on homosexuality and sexual disorders. In 2005, he also reportedly helped draft Vatican rules barring gay men from becoming priests. French churches often sent seminarians suspected of being gay to Anatrella, according to the National Catholic Reporter.

In 2006, Daniel Lamarca, a former seminarian sent to Anatrella in the 1980s, said that the priest told him he could cure his homosexuality by having sex with him. Anatrella reportedly called this “body therapy.”

Pascal then returned to Anatrella at age 31, on his brother’s advice, after having marital issues. He said Anatrella had him lounge around in his underwear and submit to nude massages, La Croix International reported.

But even though three accusations against Anatrella emerged in 2008, French courts refused to consider two of them because the statute of limitations had passed. Courts rejected the third accusation due to lack of evidence.

Anatrella has vigorously denied the charges. Nevertheless, in 2018, the clergy stripped him of all priestly duties, including counseling, officiating mass, and public speaking.

Anatrella has called homosexuality “an incompleteness and a profound immaturity of human sexuality” in an editorial he wrote for L’Osservatore Romano, a daily Vatican newsletter. Other tidbits from the article include Anatrella calling homosexuality “a problem in the psychic organization” and stating that the Catholic Church, for theological reasons, should only deal with “men mature in their masculine identity.”

He also penned a collection of “warning signs” that suggest a seminarian is homosexual: students who have troubled relationships with their dads, isolated lone wolves, people who perused pornography, and people who often saw themselves as victims.

Pastor says he doesn’t hate gay people, he just thinks they’re all pedophiles who should be executed

After Juneteenth, what does this 4th of July mean for Black Americans?