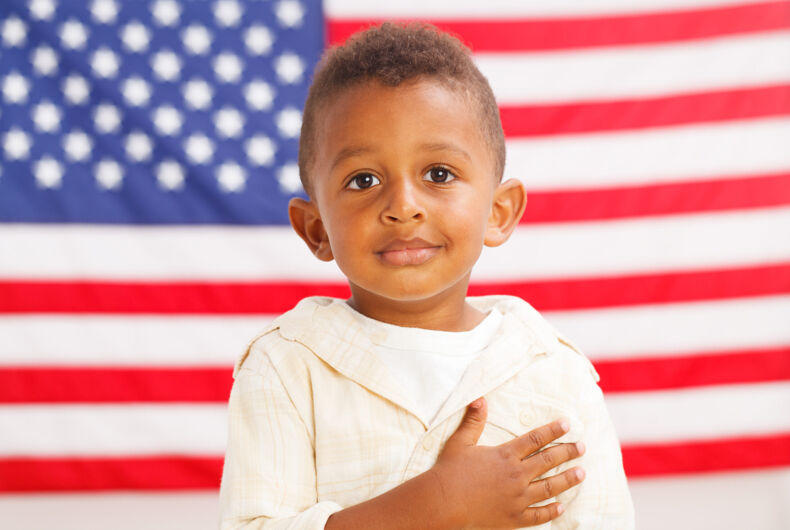 This July 4th, America will celebrate 245 years of independence from British rule. However, when President Joe Biden signed into law Juneteenth as a federal holiday, it forced Americans to take a sterner look at what this July 4th means.

More than two years after the Emancipation Proclamation in 1863, and two months after the end of the Civil War on April 9th, 1865, enslaved African-Americans in Texas found out they were free on June 19, 1865, called Juneteenth. Also, it’s known as Freedom Day, Jubilee Day, Liberation Day, and Emancipation Day.

Related: An LGBTQ Declaration of Independence

With two wildly disparate celebratory liberation narratives about independence, America must reconcile its founding ideals with her spotty lived-reality.

In 1852, Frederick Douglass called America out on its hypocrisy in his speech, “What, to the slave, is the Fourth of July?” In it, Douglass stated that a country in the throes of slavery has to close its sizeable gap between the ideals of the United States and its dastardly deeds toward people of color. His words still resonate today.

“What have I, or those I represent, to do with your national independence…. I am not included within the pale of this glorious anniversary! Your high independence only reveals the immeasurable distance between us…. This Fourth of July is yours, not mine,” Douglass said.

But Black patriotism is exhibited not only on the battlefields of America’s wars but also in America’s streets and sports arenas.

For example, in 2016, San Francisco 49ers QB Colin Kaepernick began to protest police brutality against Black Americans and other forms of social injustice by taking a knee during the national anthem. His action was seen as polarizing, un-American, and unpatriotic. However, when patriotism is narrowly defined, it can only be accepted and exhibited within the constraints of its own intolerance.

Case in point, former President Trump, in particular, stoked the flames of Kaepernick’s expression of protest. Trump publicly criticized Kaepernick and his allies, calling them S.O.B.s and saying that taking a knee during the national anthem was against the American flag, cops, and the military.

To Kaepernick’s defense, former Attorney General Eric Holder tweeted a photo of one of the first images of Martin Luther King down on his left knee in Selma, Alabama on February 1, 1965. Holder tweeted, “Taking a knee is not without precedent, Mr. President. Those who dared to protest have helped bring positive change.” King said in his Montgomery Bus Boycott speech on December 5, 1955, “The great glory of American democracy is the right to protest for right.”

The controversy of taking a knee during the singing of “The Star-Spangled Banner,” America’s beloved national anthem, brought heightened attention to the anthem’s racist history. Francis Scott Key, who penned the lyrics, supported slavery and came from an influential plantation family in Maryland. The song’s third verse, no longer sung after the Civil War, included the lyrics, “No refuge could save the hireling and slave / from the terror of flight or the gloom of the grave.”

In depicting the mangling grip of white supremacist domestic terrorism on Black lives, Malcolm X said in 1965, “That’s not a chip on my shoulder. That’s your foot on my neck.” Last year, the world got to see a nine-minutes and 29-second video of former Minnesota Police officer Derek Chauvin’s murdering George Floyd by placing his knee on Floyd’s neck.

Floyd handcuffed, lying face down, and saying, “I can’t breathe,” went limp. Last week, Chauvin was sentenced to 22 and a half years in prison. However, the ongoing struggle against police brutality persists.

This Fourth of July, people will once again sing the “Star-Spangled Banner” or recite the Pledge of Allegiance or reenact the Continental Congress of 1776 or watch reproductions of the “rockets red glare and bombs bursting in air.” America’ will showcase her indomitable spirit of bravery and patriotism as vaxxed or non-vaxxed citizens during this ongoing pandemic.

However, this 4th will be different from the previous ones. Juneteenth can no longer stand in the shadows of America’s celebration of independence. Juneteenth highlights how independence is inextricably linked to America’s core values of life, liberty, and the pursuit of happiness for all Americans.