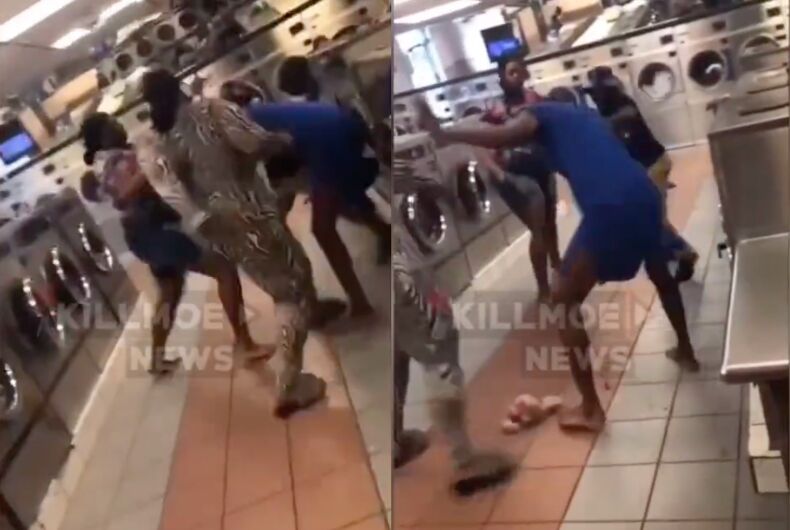 A transgender woman was stabbed by a group of people in a DC laundromat.Photo: Screenshot

A transgender woman was beaten and stabbed repeatedly inside a Washington, D.C. laundromat by a group of patrons shouting anti-LGBTQ slurs.

The victim was stabbed repeatedly in the arms and head.

Video of the confrontation posted online shows the woman being surrounded by two women and a man. They start punching her and slamming her into machines. At some point, one of them stabbed the victim.

As she staggers to the back of the laundromat, bleeding profusely, the attackers flee after collecting their unwashed laundry.

D.C. police are investigating the incident as a hate crime, but no arrests have been made yet.

Sixty-five anti-LGBTQ bias crimes were reported in the District in 2020, a steep drop from 2019. At least 44 transgender or gender non-conforming people were killed nationwide that year; most victims, like the woman at the laundromat, were transgender women of color.

President Joe Biden acknowledged the violence plaguing the community in recent years in his statement recognizing the International Day Against Homophobia, Transphobia and Biphobia.

“Both COVID-19 and rising authoritarianism around the world continue to widen economic, social, and safety gaps for LGBTQI+ people — and an epidemic of violence still rages, with a particular impact on the transgender community, specifically transgender women and girls of color,” Biden said at the time.

Yesterday, Biden tweeted another message of support for the trans community, telling them “your President has your back.”

To transgender Americans across the country — especially the young people who are so brave — I want you to know your President has your back.

During Pride Month — and all the time.