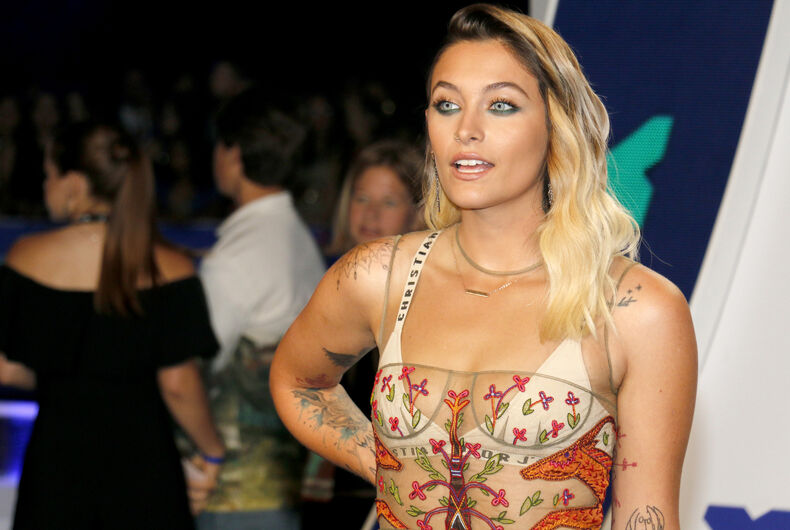 Paris Jackson at the 2017 MTV Video Music Awards held at the Forum in Inglewood, USA on August 27, 2017.Photo: Shutterstock

Paris Jackson, the second of three children to the late Michael Jackson, appeared on an episode of the Facebook Watch show Red Table Talk. On a special episode, Willow Smith hosted a conversation with Paris, who revealed how her religious family still finds homosexuality “very taboo” and avoids talking about it.

“My family is very religious, and a lot of, like, homosexuality is just very taboo, so they don’t like to talk about it. It’s not really accepted,” Paris shared, noting that both of her brothers now support her although “they didn’t understand it at first.”

Paris was born to Michael, the entertainer known as King of Pop, and his second wife Debbie Rowe in 1998. At eight years old, she first acknowledged her attraction to another girl.

“I was eight years old, in love with this female on the cover of a magazine,” she remembered to Rolling Stone. “Instead of yelling at me, like most homophobic parents, he [father Michael Jackson] was making fun of me, like, ‘Oh, you got yourself a girlfriend.’”

Her father died in 2009, when she was 11. Custody of her and her siblings, Prince and “Bigi” (formerly known as ‘Blanket’ after Michael dangled him out the window as a baby), went to Michael’s mother Katherine, who raised Michael and his nine siblings as Jehovah’s Witnesses. Rowe had withdrawn her parental rights to Prince and Paris.

In 2018, Paris made clear that she is out, and has been since her youth, although she’s rejected labels or descriptions of her as bisexual.

“There are pictures of me kissing girls online. Why are people just now saying this is news?” she said.

“I came out when I was 14. I’ve referred to the community as ‘my fellow LGBTQ+’ on stage before,” she shared on Insta to 3.2 million of her followers. “I’ve talked about having a crush on girls when I was eight in my Rolling Stone article.”

Paris, who was then 20 years-old, added, “And I’m not bisexual, I just love people for people. I don’t label myself so please don’t label me. Thank you!”

.@OfficialWillow is doing her very first one on one interview on the Red Couch with her friend @ParisJackson ❣️This was such a special moment and conversation for so many reasons. It was so eye opening and simply beautiful witnessing the thoughts & bond of these two young women. pic.twitter.com/O0KAoL5zzX

This week's special episode on the Red Couch features the incomparable @ParisJackson ❤️
See Paris and @OfficialWillow discuss everything from their music to social anxiety in a conversation you won't want to miss. Only on @facebookwatch pic.twitter.com/ZbpvWJRrxs

Toward the end of the episode, Willow, who is also out and the child of worldwide-recognized celebrities, asked Paris, “How was that journey for you… being in the limelight and being famous and having all of these people looking at you and figuring out your sexuality?”

“I mean, I’m still kind of figuring it out,” Paris replied, before talking about her family’s “religious” ways. Rather than try to push them into acknowledging her sexuality, Paris said, “I’ve gotten to a point where I respect them and I have love for them. I respect their beliefs. I respect their religion.”

“Right now, I’m at a point where it’s like, to expect them to put aside their culture and their religion — like, expectations, to me, lead to resentments,” she remarked.

“And, like, what people think about me isn’t my business, you know?”

Paris continued, “Yeah, but there were moments where it was really hard, and, like, you feel alone. You feel kind of excluded.”

That lead Willow to ask, “Were there people in your family who supported you?”

“My brothers,” Paris answered, “yeah, they didn’t understand it at first. My older brother [Prince], who’s about 14 months older… and then Bigi,” referring to Blanket. “He goes by BG now. He’s four years younger, but they’ve always been super supportive.”

Paris shared that Prince even “joined a GSA club in high school… to like, learn about it ’cause he wanted to support me. Like, not a lot of people can say they have siblings that support them like that.”

Willow also remarked on how “very weird” it was to come into her sexuality due to the attention and fame she had, especially after her hit song “Whip My Hair,” which she released just before turning ten in 2010.

“I was like, ‘Is there something wrong with me? Like, why is everyone saying this?’” Willow recalled.

“I thought for a really long time that the only way to express my sexuality as being a female that liked other females was to be super masculine,” Paris reflected. “I had the short hair, and I had all the things. I just didn’t know any better. I was just learning as I was going along and was very sheltered from all of that at a young age, so I went all in immediately.

“Now I’m just – I can do whatever and do whatever feels good and dress however and act however, and it doesn’t change how I feel on the inside.”

Paris and Willow both talked about their other shared experiences, such as their struggles with mental health, past experience with self-harming, and contemplation of suicide. They also talk about the nature of their celebrity, dealing with fame while having anxiety, and how both affect their friendships and relationships. (“Everyone that walks into my house signs an NDA. Like, it’s gnarly,” Paris shared.)

Paris also performed an unreleased song on the show, “Freckles,” and talked about continuing her professional music career. She revealed her debut album, Wilted, which released last year, was inspired by heartbreak.

“Heartbreak was the main thing, and it was the deepest heartbreak I had ever experienced, but also one of the most powerful rebirths that I’ve ever had and finding my voice and finding my sound and embracing being a musician, ’cause I was scared to do that for a long time,” she reflected.

Paris publicly dated rocker Michael Snoddy, but the two broke up in January 2017. She was then rumored to have a relationship with pansexual actress and supermodel Cara Delevingne, and most recently with musician Gabriel Glenn.

Watch Willow’s sit down with Paris on Facebook Watch now.

Don’t just sing for Juneteenth. Commit to ending the racism that made it necessary.