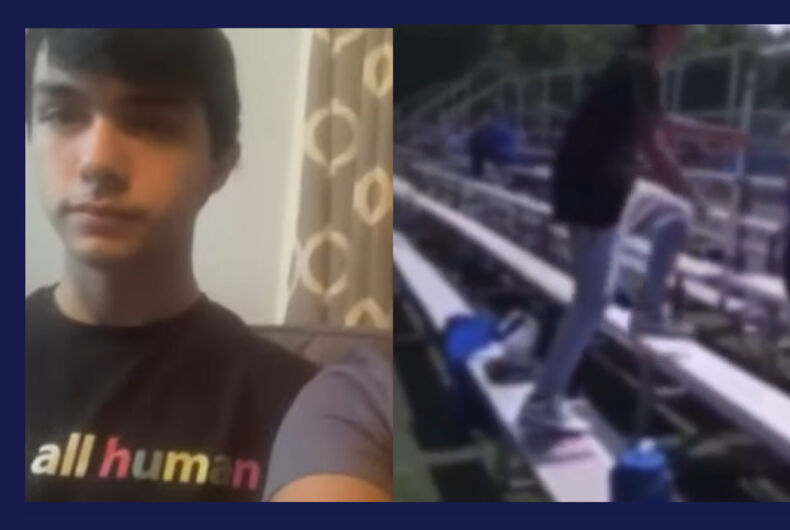 Tristen Torrez (left) was attacked outside of his school while wearing a Pride flag.Photo: Screenshot/WTOL

Although he was already out to some of his friends, Tristen Torrez wanted to be brave and come out to his entire middle school community in a subtle, simple way before the school year ended. So last week, he wore a Pride flag to school.

The 14-year-old expected to receive some kind of backlash as a result, but what actually happened was worse than he imagined. Outside of the school’s field, he was slammed onto bleachers by one student, punched and dragged repeatedly, choked, and drenched with water — all while other students surrounded him and one recorded.

Torrez said he did not know the student and hadn’t interacted with them in his time attending Defiance Middle School in Ohio prior to the assault.

But he had heard that something might happen right before the attack started.

“We had gone outside to the [school’s] stadium… and some friends and I were just sitting in the bleachers for a while,” he recalled to Crescent News, “when I started hearing that someone might come up to me and dump some water on me or push me.”

According to Torrez, “A few minutes passed by before the incident” began.

“He came up behind me, dumped water on me, pulled me down the bleachers, grabbed the flag off my neck, beat me with it and choked and hit me a few times,” Torrez recalled, adding that the attacker “used a slur once or twice.”

“When I went to school with the flag, I thought I might hear a slur or two, but I didn’t think I would get beat up for bringing as something as innocent as a flag to school,” he said.

After the attack started, Tristan ran away and tried to hide for the rest of the school day, fearing “that someone might try to do something or finish up.” His friends had to kept him safe in the girl’s restroom.

Tristan ended up with a bruised collarbone, scraped ankle, and a headache.

Video showing the attack was shared widely via Snapchat and Facebook, going viral within days of the incident. Tristan is still not sure why he was attacked, saying he’s been told many varying reasons that don’t adequately explain it.

“I’ve heard that it was a dare. Someone told me it was because I said a racial slur, which was completely false,” he said, but people have told him “it was because I’m gay” and the students encouraged the assailant to “just to do it any way.”

“He’s so used to the bullying it was kind of nothing to him, but to me, it was heartbreaking,” his mother Brianne Torrez, said in an interview with Tristan for local CBS affiliate WTOL 11.

The attacking student wasn’t publicly identified, but the Defiance City Schools superintendent sent a letter to the district community condemning the attack. They added that they referred the incident to law enforcement.

“Please know, this type of behavior is not and will not be tolerated at Defiance City Schools,” wrote superintendent Paul Morton.

Brianne expressed that they’ve received an outpouring of support in the aftermath, but she still wants accountability.

“I think everyone behind the cameras needs to be held accountable, too,” she said. “We’ve known for a few years that Tristen is gay, and we know how hard it was for him to come out, and this is what we’ve been scared would happen. I hope that it doesn’t get worse, I hope this will get better.”

In the end, despite the horrifying ordeal, Tristen expressed that he was glad he wore the flag anyway.

“During the day, I heard some people say some slurs to me, but a lot of people told me I was brave and they were proud of me, and some people gave me hugs,” he said.

“For the most part I felt very supported, and I’m glad I did it.”