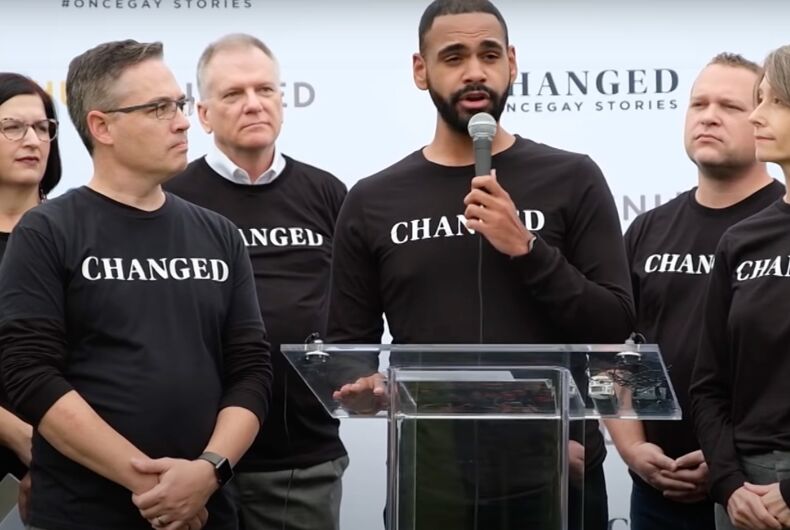 CHANGED activists held a press conference outside the US Capitol in 2019.Photo: Screenshot

A small group of men and women who have declared themselves “ex-gay” or “OnceGay” lobbied Congress today in opposition to landmark LGBTQ non-discrimination legislation. The group also opposes efforts to make conversion therapy illegal; the psychologically damaging pseudoscientific technique claims to change people from gay to straight,

The “formers,” who are associated with the organizations Church United and the organization Changed, say that they’re the real oppressed minority here. But instead of advancing their interests, they argued against LGBTQ people’s.

“CHANGED has come to DC to appeal to Congress to focus on human dignity, not identity politics,” Elizabeth Woning, the group’s co-founder said in an emailed press release. “We are Christians with LGBTQ in our past. Many, like us, have changed. We left LGBTQ because we wanted to.”

“Article 18 of the Universal Declaration of Human Rights affirms we have the right to live out what we believe. Fair treatment in America shouldn’t rest with one’s social identity, like LGBTQ or even religious beliefs, but with respect for the dignity of every person.”

“”I didn’t want to live life as a gay man,” Ken Williams, the other co-founder, said. “I was tormented by suicidal thoughts and was unfulfilled. The talk therapy I received when I was a minor saved my life. I wanted a different way forward and my sexual desires eventually changed. I have been married to my wife for 15 years. We have four children together.”

In 2019, two significant “ex-gay” leaders came out of the closet. The first is David Matheson, a Latter Day Saints therapist who helped write the instruction handbook for the “ex-gay” program Journey into Manhood. The second, McRae Game, led a well-known conversion ministry in South Carolina for two decades.

The group lobbied Congress in 2019 as well.