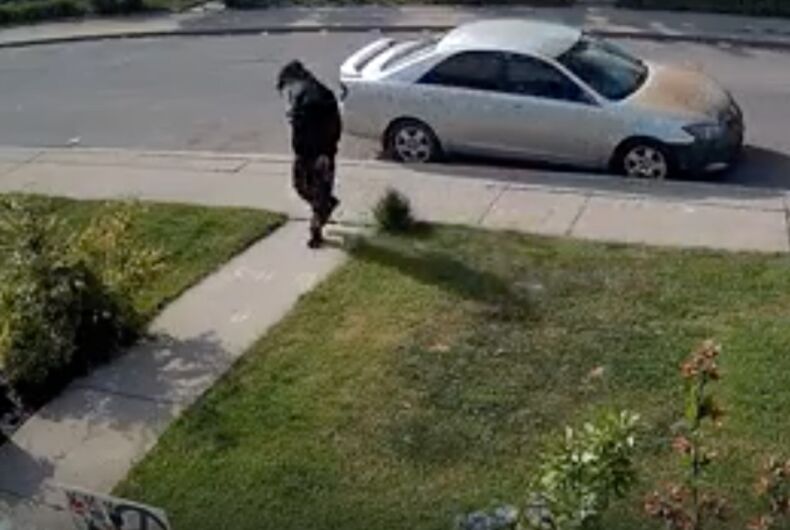 Officers say Seth Bertrand is behind a campaign of terror targeting the LGBTQ community.Photo: Screenshot

A Canadian neo-Nazi has been arrested and charged with vandalizing a gay couple’s home as part of an ongoing campaign of terror aimed at the men and their two children. The couple has a Pride flag hanging on their porch that caught the man’s attention.

The man had previously been arrested and charged with vandalizing a transgender support center earlier this year.

Seth Bertrand repeatedly scrawled swastikas and racial and homophobic slurs on the Windsor-Essex Transgender and Allied Support office building and broke a window before being caught and charged in April.

But at the same time, officials say, he was terrorizing a gay family with two small children. Bertrand’s alleged harassment was so severe, the couple’s friends set up 24-hour surveillance of their home and they sent their children to stay with relatives.

And after days of nonstop abuse, the brazen neo-Nazi rang the couple’s doorbell and pretended to be a concerned neighbor. Bertrand asked to see the footage from the couple’s security camera to ensure his face couldn’t be seen.

Bertrand is accused of slashing tires on the couple’s cars along with any neighbors who parked on the street in front of their home. He smashed and ripped mirrors off of cars, carved “Fuck Fags” on one car, and left notes signed “Heil Hitler.”

“Our tires were slashed. We’ve had things broken off of our home. We had a camera ripped off of our house. We had the mirror from our neighbor’s car that got vandalized thrown at the big bay window in front of our home,” Aaron Bergeron told local media.

After the couple’s plight made the news, Bergeron and police say Bertrand approached the home asking to see the video footage to ensure he couldn’t be identified.

“It’s been scary and the fact that he was here and talking with my children, it makes me feel incredibly anxious,” Bergeron said.

Bertrand was identified by the footage – including where he approached the house during the day to try to destroy the evidence. He was also caught on video vandalizing the center after a local company donated security cameras to the facility.

Hello Facebook world! I am hoping that you can help me. The pictures that I have included in this post is the latest in…

Here is the video of the guy leaving the note and throwing the brick. Just so everyone know he missed the window but did do some damage to the window frame and the plants on the porch. I guess Corbin was right and he is jealous of our plants. #hatecrime #coward