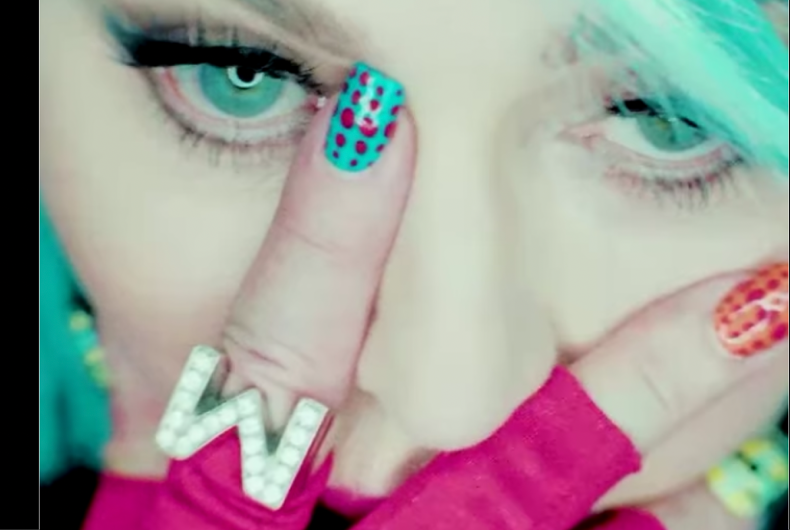 Madonna helped kick off New York City’s Pride celebrations this weekend with a surprise performance at The Standard Hotel’s Boom Boom Room in New York City on Friday, June 25 — and in the process, declared the Big Apple back open after the COVID-19 pandemic.

She also unveiled a new video for Pride entitled “No Fear, Courage, Resist,” which premiered on jumbo screens in Times Square yesterday and is now available on her Instagram.

“We are here to celebrate our LGBTQ+ brothers and sisters, support some amazing Queer initiatives, declare Pride NY weekend open and the return of NYC,” she wrote on Instagram to tease her appearance at The Standard.

The performance was at a fundraiser for the Ali Forney Center and the Haus of Us, two organizations that support LGBTQ youth and provide for LGBTQ communities.

The 62 year-old pop star showed up at 1:30 am, with blue hair, long pink but fingerless gloves, and a bra-less mesh top with leather straps that bore the words “NOT MY PRESIDENT” spelled out in rhinestones. Her new “No Fear, Courage, Resist” video played on the jumbo screens in Times Square prior to her arrival.

Using a curved bar counter as her stage at The Standard, Madonna sang “Hung Up” and “I Don’t Search I Find.” At one point she took a swig from a bottle of champagne and spit it out on the bar.

To not celebrate Pride with other people “would have been a tragedy for me,” Madonna told the crowd, according to Variety.

Madonna, a longtime supporter of the LGBTQ community, also lamented that New York nightlife had shut down for more than a year due to the pandemic and expressed cautious optimism that the worst may be over.

“Take nothing for granted because you never know what’s waiting for us around the corner,” she told the crowd. “Learn to love yourself.”

Madonna and Quinto auctioned off three Polaroid photographs to benefit the advocacy groups. They also announced that they made personal donations of $25,000, bringing the total raised from the night to more than $100,000.

“Everybody in this room is here because you’ve been successful and are making a difference,” Quinto said during the auction, “and now you’re here at the best fucking Pride party, in the best fucking city in the whole fucking world. Now it’s time to make sure that other people get to be here, too.”

New York City’s Pride events were largely curtailed last year because of the pandemic, but are back this weekend for 2021, including two Pride parades on Sunday.

Madonna was all for it, telling her fans on Instagram: “Let’s POP the cherry on Pride With a Bang!”