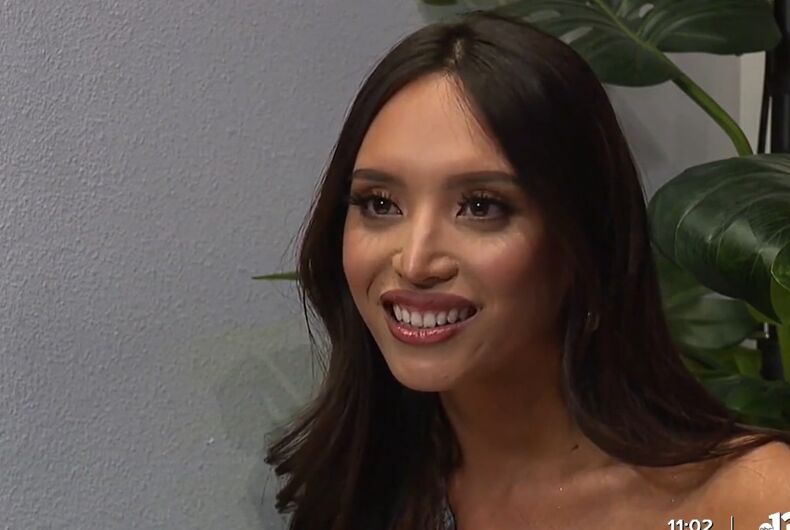 After winning the Miss Nevada USA pageant this past Sunday, Kataluna Enriquez will become the first transgender woman to compete in the national Miss USA pageant.

“My community, you are always in my heart. My win is our win. We just made history. Happy Pride,” the 27-year-old wrote in an Instagram post.

She told KABC that she’s proud to be the first trans woman to compete in the Miss USA pageant.

“I’m the first trans woman and trans woman of color and it’s time that our voices are heard,” she said. She is Filipina American. “It’s amazing because it’s Pride month and it’s the 52nd anniversary of Stonewall so it’s a special moment for my community.”

Enriquez, who works as a model, said that she understands the importance of trans representation for young people because she wished she could have seen people like her at the pageant. She said that she struggled with her mental health when she was younger.

“When I was young, I said that one day I hope to see someone like me on stage at Miss USA, and it just happened to be, I was the person I needed,” she told the Las Vegas Review-Journal. “That’s something I felt growing up and that’s the last thing that I would want anyone to feel, so if I could have and give that to someone, I think it’s an amazing time of my life.”

“Kataluna Enriquez being crowned Miss Nevada is a huge win for trans visibility and sends a powerful, but simple message to the world: trans women are women,” said Anthony Allen Ramos of GLAAD. “Enriquez’s presence on the Miss USA stage later this year will not only help to accelerate acceptance of the trans community, but also inspire so many other trans women who feel like they have not seen themselves represented in that space before.”

Miss USA is run by the Miss Universe Organization, which banned transgender competitors until 2012. At the time, Donald Trump owned the organization and later sold it in 2015.

In 2018, the first transgender woman to compete in the Miss Universe pageant was Miss Spain, Angela Ponce.

The Miss USA pageant will be held in November in Oklahoma.