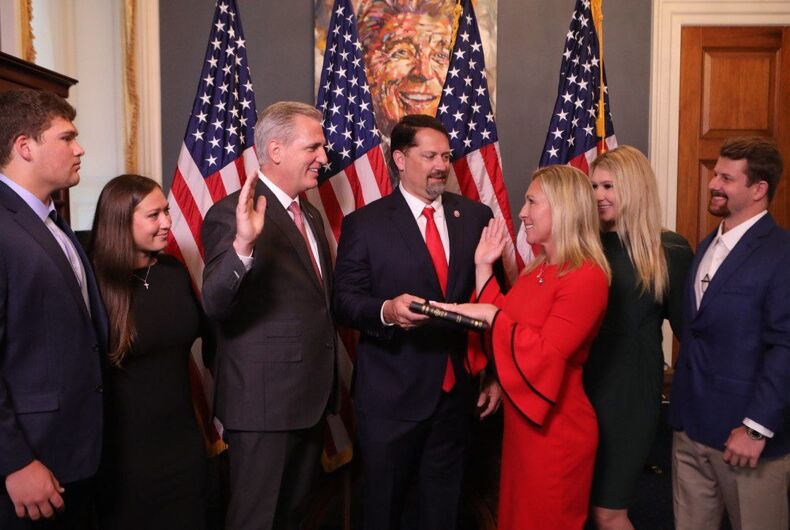 “Nothing, nothing, I’ve got absolutely nothing for sale.”

This scene in Mel Brooks’ History of the World, Part I, where he barks from an outdoor market stand that he has nothing comes to mind whenever I attempt to comprehend precisely on and for what the current Republican Party stands.

Related: Here’s just some of the nonsense that conservatives blame Joe Biden for. So far.

Since at least the mid-20th century, the political agenda of Republicans centered on reducing the size of the national government, turning back the progressive programs arising from FDR’s “New Deal,” eliminating entitlement programs and government regulations of a “free” market economy, privatizing many government systems such as public schooling and national parks, and eliminating rules on controlling environmental pollution and destruction.

During the rise to power of the conservative, Christian, evangelical political right, the party began catering to organizations like the Moral Majority, the Religious Roundtable, and Christian Voice, which pushed “social” issues as a centerpiece of the Party.

These groups imposed their agendas on Republicans, including mandating tax-exempt status for religious schools, ensuring that women would not have control over their bodies, or that LGBTQ people would not have equal rights on par with heterosexual people. Local groups challenged content of school textbooks and sex education in public schools.

The nomination of Barry Goldwater on the Republican ticket in 1964 further veered the party to the right. In his extremist platform was the call for significantly restricting the role of the federal government in the lives of people.

Though I could never abide by these agenda items, at least the Republican Party had a clear set of priorities.

But all I can derive from what it has to sell today is… “absolutely nothing.”

I kept thinking and asking myself, “what am I missing?” Aside from what everyone knows already — that the Party has terminated it desire (though not its ability) to function as a major political party to serve the people — the group appears to have really become a cult bowing to the personality of Donald Trump.

The Republic Party’s agenda (if that is what one would even call it) is power over policy, obstruction over passing legislation, and control over service.

But “why,” I kept asking. Why would all these Republicans lose their integrity, their dignity, their very souls to serve a failed former president? The reason must be more than simply their fear of Trump having them primaried from the right in which they may lose their Congressional seats.

Well, I thought so, until I heard the wit and wisdom of Michael Steele, former Chair of the Republican National Committee from January 2009 to January 2011. While he was in office, he often upset me by some of the “unkind” words he had to say about then President Barack Obama.

More recently, however, in his role as political pundit on networks such as NBC and MSNBC, representing someone who is in touch with the pulse of the Republican Party, he offers a special perspective — and a valid autopsy report of its current demise.

Whenever network program hosts ask him to explain what is doing in the Party, Steele replies to “why” by simply quipping, “You can’t explain stupid.” And, yes, that about says it all!

Most Republican non-legislating legislators bow down and kiss the ring of their would-be-autocrat who lost the House of Representative, the Senate, and the White House. Stupid.

Most Republican non-legislating legislators neither voted to impeach nor convict the clearly Constitution-abridging leader at the potential cost of our very democracy. Stupid!

And unless and until the Senate abolishes its filibuster mandate (requiring a supermajority of 60 votes for passage), we the people will continue to suffer.

Yes, the United States political system has gained from having strong parties that once talked and negotiated, at least, in somewhat good faith efforts to seek common ground.

Those days seem now long gone, and unless we either eliminate the Senate filibuster, or the Republican Party wakes up and smells the hot embers of our once reasonably reliable democracy, we will all be forced to walk barefooted on those embers.

Pride in Pictures: Marching with my girlfriend who is now my wife